Dreams to be an IAS Officer and End Child Labour 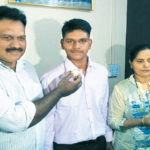 Mohammed Kaif, a 15-year-old boy from St Xavier High School, Belgaum, Karnataka, made his family, school and community proud by scoring 100% marks in his SSLC (Secondary School Leaving Certificate) examination. By doing so, Kaif earned the top spot among 13 lakh students from Karnataka who appeared in the exams. Kaif, the only son of his parents, had initially got 624 out of 625 marks but still sent his papers for revaluation following which he earned a perfect score. Parveen Rashid, his mother and a teacher, told TwoCircles.net that her son had made them proud with his achievements.
(Extracted from twocircles.net)