The swelling ranks of Muslim girls in the Jewish school offer a glimpse into the deep ties between Calcutta’s Muslim and once-thriving Jewish community. 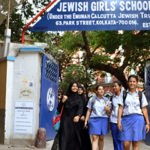 When Mitana Alexander bid goodbye to Calcutta’s Jewish Girls School in 1975, she was its last Jewish student. The bulk of the others were Muslims. But it was not the steady influx of Muslim girls in the preceding two decades that moved Alexander’s parents to take her out of the school, she says. They were worried because she was the last remaining occupant of a Jews-only dormitory, as most Jewish girls they had known had migrated to Israel, America or Europe “with their folks.”
“They (school authorities) had to retain a matron just for me,” recalls Alexander, now aged 50. “I would be alone in the dormitory at night and my parents started panicking. Muslims had nothing to do with my leaving.”
Distinctly Calcutta
The swelling ranks of Muslim girls in the Jewish school offer a glimpse into the deep ties between Calcutta’s Muslim and once-thriving Jewish community. More than 1,200 of the nearly 1,400 students are Muslims, as is the school’s vice principal and half the faculty. The change began in the 1950s, when there were not enough Jewish families needing an institution set up specifically to instil Jewish values. As Jewish enrollment petered out, the authorities decided to admit children of other faiths. The biggest response came from the Muslims of nearby areas.
Today, there is very little “Jewish” about the school, save for perhaps its name, the Star of David on the school gates, the school uniform and notebooks, and portraits of Jewish patrons on the walls. Authorities have made available a “changing room” for Muslim girls whose parents frown upon their stepping out in public in school skirts. These students leave home in the burqa, change into their uniforms once in school, and put on the burqa when leaving.
“The school has come to symbolize Jewish-Muslim harmony in Calcutta,” says managing trustee Aileen “Jo” Cohen.
The harmony is visible elsewhere too; the city’s three synagogues”the smallest of which boasts of more chairs in its prayer hall than there are Jews in Calcutta”are looked after by Muslim caretakers. Muslims also help with the dressing of bodies for Jewish burials and outside the Magen David Synagogue, Muslim bangle sellers wearing the topi (the Muslim prayer cap), have set up kiosks on the bustling footpath.
“The close ties and positive working relationships between Muslims and Jews are deeply rooted in the local context of Calcutta,” says Jael Silliman, 62, a city-born Jewish scholar and author, and a former Associate Professor of Women’s Studies at the University of Iowa.

Exiting Calcutta
The first Jew to arrive in Calcutta, on August 4, 1798, was Shalom Ha-Cohen. A native of Aleppo, Syria, Shalom was initially the court jeweler to a Muslim prince in northern India. Shalom’s prosperity attracted other Jews from West Asia. According to community records, the population of Jews “of Arabic disposition” expanded to 600 by the 1830s. That number stood at around 4,000 when India gained independence from British rule in 1947.
However, soon after, the community started emigrating en mass, beginning the end of a 200-year association with the city. Today, the number of Jews in Calcutta stands at 22.
(Extracted from http://edition.cnn.com)