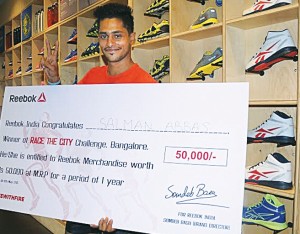 Bangalore: Salman Abbas, a student of MBA at Reva College of Management here won the ‘Reebok Race the City Challenge’ for being the winner in the six kilometre race organised by the Reebok Shoes. He was presented with a Rs. 50,000 cheque for purchase of Reebok merchandise and will endorse the Reebok products for one year.
Salman, son of Naseem akhtar and Shahinsha Begum, a teacher at the Muslim Orphanage School, was among the eight selected in the first round among 500 participants and emerged the final winner among eight who ran with 125 followers in the event held on May 11 in the Central Business district of the city.