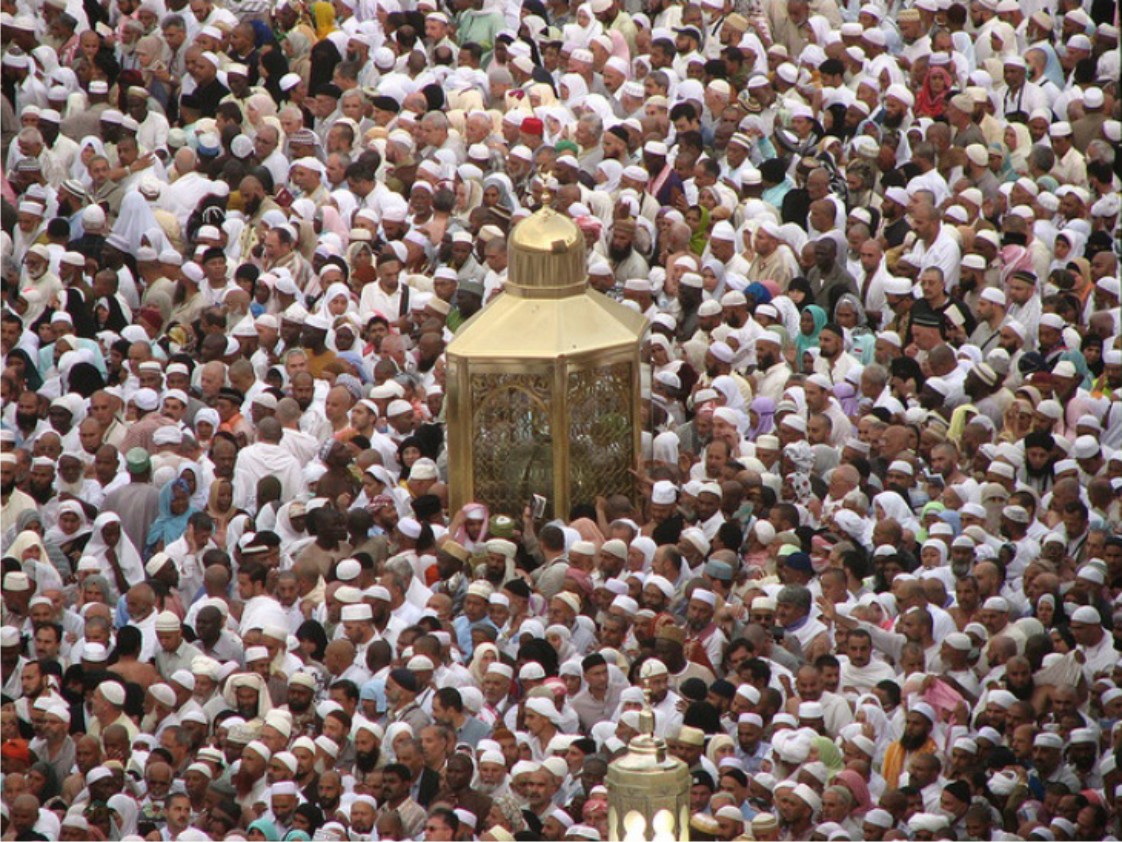 By the yearly Muslims’ celebration of the “Sacrificing Feast,” or “Eid ul-Adha,” the Muslim nation is witnessing a great experience of numerous and challenging spiritualties within the core belief of each One’s heart. To navigate such virtuous meanings, we must first remember the basic story behind celebrating such an occasion. The story of the Prophet Ibrahim and his son Ismail (May peace and blessings be upon them both) is giving clear-cut evidence about the Islamic Monotheism (Tawhid) and the complete submission to Allah’s will; For that Allah is the one and the only Creator, and the Most-Deserving of one’s heart unconditional surrender.

The story began after the Prophet Ibrahim has received a definite command from Allah the Almighty in his dream – to sacrifice his beloved son Ismail for the sake of Allah.

Allah has blessed Ibrahim with the birth of his son Ismail after his supplication to Allah.

That is mentioned in the Quran: “My Lord! Grant me (offspring) from the righteous. So We gave him the glad tidings of a forbearing boy.” [Surah As-Saffat: Verses: 100,101].

The son Ismail grew up. The father-and-son relation has been getting closer and stronger over time. Yet the Prophet Ibrahim is asked from the Almighty to sacrifice the most beloved and closest person to his heart. How the Prophet Ibrahim would respond to his Lord! And how many other Muslims would have responded if being in the same situation! That is what Eid is for introspection and ponder.

The Optimal Islamic Monotheism:
Islam means: To Submit or surrender, it also means peace, so technically, the word Islam refers to the verbal testifying by the tongue (La ilaha illallah mohammadar rasulullah), which is proved by a sincere faith inside one’s heart, and further followed by a proving physical action – with the body on the real-life ground.

The three aspects should be steadily fulfilled: Islam with the tongue, the faith in the heart, and the proof of this with outward actions of various Islamic commands. Without sticking to this Islamic monotheistic belief between the internal and the external aspects of worship, one’s faith would never reach the complete optimal form that the Prophets Ibrahim and his son Ismail have reached.

In the Quran, Almighty Allah states: “And when he (his son) was old enough to walk with him, he said: “O my son! I have seen in a dream that I am slaughtering you (offering you sacrifice to Allah). So look what you think!” He said: “O my father! Do that which you are commanded, Insha’ Allah (if Allah wills), you shall find me of As-Sabirun (the patient).” (Surat As-Saffat, Verse: 102).

This verse elaborates for us several virtuous meanings to ponder over regarding the positions of both the Prophets. The Prophet Ibrahim willingly chose to submit to his Lord to sacrifice his son. He prioritized Allah’s command above all.

The son also willingly submitted and accepted his father’s decision. He showed enough courage and patience for his father to do what he ought to do. Both of them fulfilled absolute total submission to Allah’s command. That is merely a great manifestation of the profound true meaning of “Islamic Monotheism” or “Tawhid”; to worship only one God.

Fundamentally, Islam is all about Monotheism. All of the rituals, morals, and transactions in Islam emphasize this belief that it is to do everything only for the sake of Allah. Subsequently, the obligations and prohibitions aim to allow and facilitate the fulfillment of this belief upon Muslims. All the consequences, Heaven, Hellfire, reward, punishment – are designed to finally test those who submit to Allah and those who do not do so.

In the Quran: “Then, when they had both submitted themselves (to the Will of Allah), and he had laid him prostrate on his forehead (or on the side of his forehead for slaughtering); We called out to him: “O Abraham! You have fulfilled the dream! Verily thus do We reward the Muhsinun (good-doers). Verily, that indeed was a manifest trial. And We ransomed him with a great sacrifice (i.e., a ram); And We left for him (a goodly remembrance) among the later generations. “Salam (peace) be upon Ibrahim (Abraham)! Thus indeed do We reward the Muhsinun (good-doers). Verily was one of Our believing slaves.” [Surah As-Saffat: 103-111]

Reflection of Monotheism on Pilgrimage (Hajj):
Since that time, the celebration of Muslims of this occasion began on “Eidul Adha,” declaring and pointing out a great momentous model of Islamic Monotheism (Tawhid) for the whole Muslim nation, till the Day of Judgment.

A set of symbolic rituals during pilgrimage/Hajj (like stoning the devil on the day of sacrifice) acts as a significant back flash story reminder for all Muslims to test their faith and make them contemplate.

It refers to the acts of the Prophet Ibrahim, his wife Hagar, and their son Ismail – during the sacrificing incident – when they had stoned the devil who whispered get them distracted from submission to ALLAH’s command.

That shows that The Prophet Ibrahim is the most excellent role model fulfilling the Islamic Monotheism further in actions than verbal Testifying. It also indicates Allah’s reward – in the worldly life and beyond – to those who would similarly exert their efforts to submit to Allah to achieve Islamic Monotheism through the tongue, heart, and actions.

Reflection on the Daily Life:
Do we have enough courage to sacrifice the most favored things to our hearts, only for the sake of Allah!

In real daily life, attachments could be many, be it yourself, your offspring, parents, wealth, husband or wife, relatives, friends, or Trade. Detachment of one’s heart out from various worldly gains would end up getting this heart attached to Allah only.

In the Quran: “Say: If your fathers, your sons, your brothers, your wives, your kindred, the wealth that you have gained, the commerce in which you fear a decline, and the dwellings in which you delight are dearer to you than Allah and His Messenger, and striving hard and fighting in His Cause, then wait until Allah brings about His Decision (torment). And Allah guides not the people who are Al-Fasiqun (the rebellious, disobedient to Allah). [Surat At-Taubah: 24]

The main purpose of Islam is reaching the Islamic monotheism (Tawhid), in both inward and outward actions, and achieving piety and submission to Allah. Entirely Allah does not need our sacrifice. Allah had protected the Prophet Ismail from being offered at the end.

In the Quran: “It is neither their meat nor their blood that reaches Allah, but it is piety from you that reaches Him. Thus have We made them subject to you that you may magnify Allah for His Guidance to you. And give glad tidings (O Muhammad – peace be upon him) to the Muhsinun (doers of good).” [Surah Al-Hajj: 37]

To fulfill the optimum level of belief – the Islamic monotheism/ Tawhid – in both inward and outward actions is the ability to give up – from one’s heart – everything but Allah and exert the One’s paramount effort to prove that physically through acts of worship.

The pilgrimage (Hajj) represents a practical act of worship by which one would prove that every ritual within reflects on the Islamic Monotheism.

These revealed stories are not mentioned in the Quran purposelessly. It’s instead a call for us to imitate the same level of submission in our hearts; if we seek to reach out to a sound belief of (Tawhid).

In the Quran, ALLAH is telling about the stories of Prophets:
“Indeed, in their stories, there is a lesson for men of understanding. It (the Qur’an) is not a forged statement but a confirmation of (Allah’s existing Books) which were before it [i.e., the Taurat (Torah), the Injeel (Gospel), and other Scriptures of Allah] and a detailed explanation of everything and a guide and a Mercy for the people who believe”. [Surah Yusuf: 111].

Allah is rewarding the pure hearts which favored Him – the Almighty – above all. One must reschedule one’s priorities, making sure that Allah is on the top of the One’s list with no one or thing else before Him. Re-organizing and checking the levels of love and attachments around oneself are all essential facets of faith that would intensely help reach the optimal level of Islamic Monotheism of La ilaha illallah mohammadar rasulullah “There’s no God but Allah, and Muhammad is the Messenger of Allah.”

(Based in Cairo, Egypt, the author is an educator and an Islamic Studies student. She is interested in art, poetry, and knowing more about cultures all over the world).