Islamic Voice 0 July, 2013 12:00 am
The Significance and Rewards of Fasting
Ramadan App
Non-Payment of Zakat 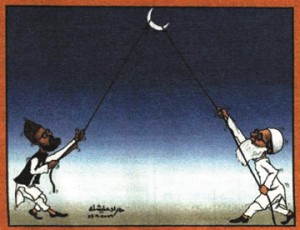 A simple act of determining the birth of new moon has been presented in such a complicated manner by Muslim scholars, that the entire Muslim world has been living under its curse for ages.
By Dr Aslam Abdullah
Some time ago when the Sultan of Turkey decided to in­troduce electricity in the Mosque of the Prophet (Pbuh), the religious scholars and leaders opposed it on the grounds that something created artificially cannot occupy a sacred place. It was not different than the opposition, the scholars raised to the printing press when it was first introduced. They in fact banned the printing of the Quran and declared it haram. Then the loudspeaker was intro­duced and the religious scholars opposed its use in mosques, saying that the voice radiating from it is artificial. Then the television was introduced and Muslim scholars called it the daughter of Satan and then the internet also met the same fate.
On every turn of human progress, some people some times created major obstacles causing immense loss to people who followed them. The irony is that when the progress bulldozes them and makes them irrelevant, they succumb to the changes and shamelessly accept them denying vehemently their own earlier stance.
There is only one word that describes their attitude: hypocritical. Our community is led in re­ligious matters, by and large, by those who are hypocritical in their attitudes. A hypocrite is the one who acts on the basis of self inter­ests in matters involving people and changes his or her position accordingly.
As long as the leadership of the community is in their hands, Islam would remain a stranger for Muslims and an irrelevant faith to people in general.
Their attitude to change is best described in the Quran in the following verse when it says ” “When it is said to them: “Follow what Allah hath re­vealed:” They say: “Nay! we shall follow the ways of our fa­thers.” What! even though their fathers were void of wisdom and guidance?(2:170). They are still adamant in their refusal to acknowledge the supremacy of the Quran and the way the Prophet implemented it.
Moon sighting is one such issue that has become a moon fighting issue. A few years ago, a scholar of Islam refused to lead the taraweeh prayer on the first night of Ramadan saying that ac­cording to his school of thought, moon has not been sighted and the method of calculation to de­termine the new month is haram (prohibited).
A simple act of determining the birth of new moon has been presented in such a complicated manner by these scholars, that the entire Muslim world has been living under its curse for ages. The purpose of moon sighting as ex­plained by the Prophet was not moon sighting itself, but it was to determine the birth of new moon to begin the new month in a scientific and calculated manner according to the tools of the time of the Prophet.
The Prophet knew the Quranic verse that says clearly: “It is He Who made the sun to be a shining glory and the moon to be a light, and measured out stages for it (moon); that you might know the number of years and the calculations”. (10:5). And his main objective was to ensure that unlike tribal practices, Muslims should not fall to the trap of arbitrarily deciding the number of months or days of months. In order to make his point clearer about the purpose of moon sight­ing, the Prophet further elabo­rated that if you don’t see the new moon on the 30th of the month, start the new month the following day. So simple and so pragmatic.
In our time, Allah has given us tools in astronomical science to determine the birth and sight­ing of new moon. If we do not use it, we are not only denying the laws of Allah, but also defying Him. And this is what is precisely happening in the Muslim world for centuries. No one is willing to take a stand on this issue be­cause of the culture of intimida­tion these leaders have created. Any challenge to their position is easily turned into a challenge to God and anyone who challenges God is either ex-communicated or killed.
Yet the so called protectors of Islam have turned this simple act into a major conflict on moon sighting. Now ev­ery year, thousands of hours are wasted in deciding something that can easily be calculated ac­cording to the laws of Allah in a disciplined manner. Nothing that is happening in the physical universe is happening without His laws and knowledge. But our religious scholars say no to this knowledge and defy Allah and his laws by saying, one does not need to understand these laws and use them for the purpose of improving one’s life. Unfortunately, we have given them the responsibility of raising our younger generations. Our youth have been handed over to them like sheep and the future of Islam has become tied with their status and position. Their magical spell on people is as such that despite being rational in all matters of life, people refuse to see the absurdity of these people in their arguments.
In our world today, the so called leaders are the biggest impediment in develop­ing a simple and accurate un­derstanding of the Quran. They are defying God by reciting words, and they claim they are the protectors of religion!
(The writer is Editor in Chief, The Muslim Observer, USA).