A Different Sort of Birthday!

Was it really worth it, spending all that money for an excitement that was so short-lived? Serin thought.
By Yoginder S. Sikand 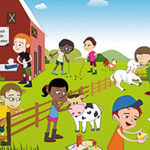 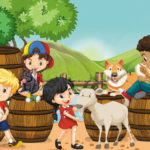 Serin was turning 13 in a fortnight’s time. “My goodness! You’ll be a teenager next week! You’ve become SUCH a BIG boy!” his mother exclaimed. “We must have a BIG birthday party for you this time!”
Being the only child of his parents, Serin’s birthday party was a great event in the family. Serin thought his birthday was about the most special day in the year. He loved the attention he received that day, the gifts, the special food and the party which his mother would so lovingly arrange, with all his friends coming over and each giving him a present!

Nani, His Grandmother
But this year, when Serin’s mother announced she was planning a BIG party to mark his becoming a teenager, Serin wasn’t at all excited. A few days earlier, Nani, his grandmother, had said something that had had a great impact on him. “Do you know why we never celebrate my birthday?” she had asked laughingly. “It’s because I don’t know when my birthday is!”
It wasn’t a custom in those days in the village where she was born, Nani explained, to note a child’s date of birth. Parents did celebrate the birth of a child, generally by special thanksgiving prayers and feeding or giving gifts to the poor, but no one’s birthday was celebrated, year after year, as the custom had now become. “It’s a Western practice that we’ve recently adopted”, Nani went on. “In my childhood, in our village no one ever had anything like a birthday party. In fact, people would be surprised why anyone would want to celebrate one’s birthday, because each time your birthday comes round, it means that you have one year less of your life on this planet left!”

A Recent Invention
Nani’s words set Serin thinking. If celebrating one’s birthday wasn’t something that everyone did right through history, if it was only a recent invention in his own family that went back at most to just two generations ago, why did almost everyone he knew seem to think that it was something almost mandatory?
Serin thought of the elaborate arrangements his parents made on the occasion of his birthday. The gifts that they gave him and the party that they organised”it must all have cost them a lot of money. It was their way to express their love for him, but, Serin asked himself, was it really worth it? He recalled some of the presents his parents had given him in the past for his birthday. How quickly the excitement that these had generated had disappeared, lasting at the most for a week or two! And as for the many delicious things to eat that they would arrange for his birthday party”the pleasure from them didn’t last more than a few minutes!

So Many Other Causes
Was it really worth it, then, spending all that money for an excitement that was so short-lived, Serin thought? Surely that money could be put to better use? There were so many other causes that it could be spent on instead.
So, that day, when Serin’s mother very excitedly announced the BIG party she was planning to arrange to mark his 13thbirthday, Serin said to her, “Mumma! No party for me from now on. And I don’t want or need any gifts, either.”
“But why, beta?” Serin’s mother asked, taken aback.
“Mumma, Nani never celebrates her birthday, and nor did all our ancestors, going back all the way to the first of them, many, many centuries ago. And so, why should we?” Serin replied. “And then, it’s such a big waste of money. I calculated that you must have spent at least 5000 rupees on celebrating my birthday last year. It would have been so much better if we had spent that money on some good cause”like giving it to a charitable clinic or sponsoring a tree-planting drive in a park or something like that. What do you say, Ma?”
Serin’s mother listened to her son with great interest. “How wise Serin has become! I never thought about all this before!” she said to herself.
“Thanks for saying this,” she replied. “You are very right! This year, we were thinking of setting aside 8000 rupees for your birthday. You could take it from us and spend it on some good cause instead. But what are you going to tell your friends, who are bound to be expecting to be invited to a big birthday party?”
“Don’t worry about that, Mumma. I’ll handle that,” Serin assured her. He was greatly relieved that his mother had responded so positively to his suggestion, and was very excited about how he planned to spend the money.
The next day at school, Serin called all his friends who he would have otherwise had invited over for a birthday party and shared with them what he had learnt from his grandmother and what he discussed with his mother. You won’t believe how excited all of them were! Almost all of them agreed that there was absolutely no need for gifts and a party to celebrate Serin’s birthday or even their own and that spending money on a worthy cause instead was a much better idea. Many of them even said that this is exactly what they would like to do on their birthday from then on! Then, they collectively planned what they would do on Serin’s birthday.
A Very Packed Day.
Serin winked awake: it was his birthday! “Thank You God for making me 13 today! Please let all our plans go well today,” he prayed, and then he bounced out of bed. In a while, his friends arrived at his home, and they, along with Serin and his family, set out on what proved to be a very packed day. They first visited a home for the aged, and then a day-care centre for blind children and later had lunch at home for people with mental challenges. Then, they spent the afternoon at a shelter for injured birds and animals. At all these places, they handed over bags containing provisions (mainly things to eat) they had brought along with them which they had bought with the money that Serin’s parents would otherwise have spent on a birthday party and presents for him.
You can’t imagine what a lovely time everyone had that day! It was a really amazing learning experience for all of them! None of them had been to such places before or done such things. Their acts of kindness towards animals, birds and people in need that day filled them with great joy!
That night, as he lay in his bed and was getting ready to sleep, Serin thanked God for the wonderful day that everyone had had and prayed that they could repeat that experience as often as they could”including on every birthday of his!