Ifra was a keenly observant girl. She took note of things that most people overlooked.

By Shahin Ashraf Ali
“Dadi, I think there is some connection between Charlie Chaplin, Dada (grandpa) and Abba!” Ifra told her grandma one day.
“Charlie Chaplin, that famous late comedian, and your Dada?! I do not know of any connection whatsoever between the two. As far as your Abba is concerned, I remember as a young boy he enjoyed Charlie Chaplin movies. Then later on I guess he grew out of his Charlie Chaplin craze,” Dadi responded.
Ifra was a keenly observant girl. She took note of things that most people overlooked. No one else in her family were aware that in Grandpa’s presence abbaseemed ill at ease with any topic related to Charlie Chaplin. He even switched the television channel airing a movie or any programme on the late actor if grandpa was around. What’s more, Ifra had even noticed the unmistakable glint in grandpa’s eyes every time Abba did so.
“There is some connection. And I am going to find out.” Ifra told herself.
Ifra went to her Grandpa, who was enjoying his evening cup of tea in the balcony all by himself. Grandma and mummy were watching their favorite serial on television.
“Dada, I want to ask you something,” she said.
Grandpa looked at her questioningly, “What my dear?”
“What is the connection between you, Abba and Charlie Chaplin?” she asked.
Grandpa almost choked on his tea. He coughed, caught his breath and then burst out laughing!
“First tell me my angel, what makes you think so?” Grandpa wanted to know.
Ifra grinned, “You know, Dada. It is you who keep telling everyone proudly, my Ifra is a very observant girl!”
“Yes, yes, indeed. There is a connection.” Grandpa admitted.
“I knew it!” Ifra exclaimed with glee.
“But, I strongly feel, you should get to know about it from your Abba,” said grandpa.”Ask him, just like you asked me,” he encouraged her.
That evening, when Abba was relaxing on the living room couch reading a magazine, Ifra went to him and said, “Abba, I want to ask you something.”
“Yes, my jaan (dear),” said Abba, putting the magazine aside.
“What is the connection between you, Dada and Charlie Chaplin?” she asked.
Abba looked stunned for a moment. He studied his young daughter’s face. Slowly, a smile spread on his face. Cupping Ifra’s face with his hands he said, “You are so sensitive and observant!” He planted a kiss on her head and began to narrate, “When I was young, I was a fan of the legendary Charlie Chaplin. Your Dada was a serious sort of person and I used to tease him by saying, ‘I wish I had Charlie Chaplin for a father!’ Then one day, I found a magazine cutting taped on my study table. It was an interview of Charlie Chaplin’s daughter. A part of the interview was highlighted with a marker pen. Charlie Chaplin was a horrid perfectionist, so the mood on the sets was almost tense. He was very strict and we were punished severely if we did not do well at school. I could not believe my favorite comedian was such a stern person in reality. But most importantly, I realized that day that my teasing had deeply affected Dada. I went to Dada and told him that I may compare him with anyone else, but I would never ever want to trade him for any other father,” Abba explained.”I do enjoy watching Charlie 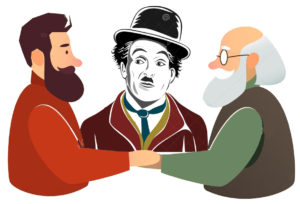 Chaplin movies even today, but not in Dada’s presence. Perhaps, I am still making amends for the years of teasing and the pain it caused to him.”
“And I would never ever, ever, trade you for anyone else. You are the best father in the world!” Ifra exclaimed, hugging her Abba tightly. 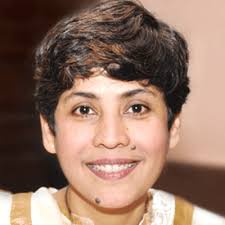