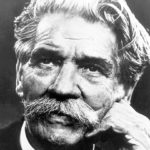 “So far back as I can remember I was saddened by the amount of misery I saw in the world around me. One thing that especially saddened me was that the unfortunate animals had to suffer so much pain and misery. The sight of an old limping horse, tugged forward by one man while another kept beating it with a stick”¦haunted me for weeks.”
“In everything, you recognize yourself. The tiny beetle that lies dead in your path”it was a living creature, struggling for existence like yourself, rejoicing in the sun like you, knowing fear and pain like you. And now it is no more than decaying matter”which is what you will be sooner or later, too.”
“All I have to say to the world and mankind is contained in the notion, reverence for life.”
(Albert Schweitzer (1875-1965) was a French-German theologian, organist, writer, humanitarian, philosopher, and physician. He won the Nobel Prize for Peace in 1952)