Islamic Voice 0 May, 2016 12:00 am
School Equipment and Educational Material for Tiny Tots Nursery Available for Half Cost in Bangalore
Allah’s World
Words of Wisdom 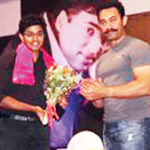 Lucknow: Sixteen-year old Arsh Ali not only makes sketches without an eraser in one go, had a solo exhibition to his credit at the tender age of four, has given lectures in ancient and modern history to post-graduate students at Allahabad university and is now dabbling in archaeology, making him possibly the youngest Indian to do so. He has already spent some days at two excavation sites in the country and is now taking his “pursuit for knowledge” much deeper after the Arcahelogical Survey of India (ASI) has allowed him to be part of excavation teams. Talking to IANS at his home, he chirps like a young man possessed by history and the field of archaeology. He has been part of excavation research at a site (still undisclosed by ASI) in search of the Indus Valley Civilization. He said the site appeared to him as an “artisans hub” as there were no dwellings that were discovered there. Another excavation that he has been part of is at Rakhigarhi in Haryana’s Hissar district. Spread over 350 hectares, Arsh informs this was a protected site which was most likely a graveyard. The excavation is being supervised by experts of Pune’s Deccan College. His mother Fatima Ali, who has been the rock of support and encouragement for Arsh since the childhood prodigy emerged, said that Chinese experts who were here last month had lauded her son for his “in depth knowledge about history”. “It is indeed heartening for us to be parents of such a genius,” says Faisal Ali, his father, who runs a tour and travel business in Lucknow. Incidentally this teenager is perhaps the only person in a country of over 1.2 billion who knows and has mastered writing and reading Hieroglyphics, an ancient Egyptian script of symbols. Only 200 people across the globe hold a degree in the subject.