Islamic Voice 0 March, 2016 12:00 am
Moin Cannot Walk, But He Swims like a Champion!
The Beautiful Banyan Tree
Tale of a Pretty Reindeer: A Miraculous Escape

Mostafa Salameh was brought up in a refugee camp before coming to the UK to study at Edinburgh University. He was knighted by the King of Jordan for his services to charity. 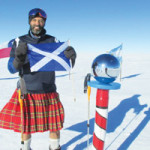 Mostafa Salameh, 44, completed the gruelling endurance trek across Antarctica over 54 days, 38 of which were spent on skis. The former refugee set off in November 2015, but was trapped at the Union Glacier base camp by fierce storms for 13 days before setting off across one of the harshest landscapes on earth. Along the way, he raised huge sums for charity, and carried a Scottish saltire for good luck, which he flew over the Pole after finally reaching his goal last month. Salameh, a Scottish-Jordanian Muslim, has previously climbed Everest, reached the peaks of the seven highest mountains on each of the continents, and made it to the North Pole. The South Pole trip is his final challenge, and raised £2 million for Jordan’s King Hussein Cancer Centre and $100000 dollars for the United Nations Relief and Works agency to rebuild a school in Gaza. Along with a Saltire and a Jordanian flag, Mostafa took a copy of the Bible and Quran on his trek. “I did it for Islam and the peaceful message this beautiful religion came to offer.” said Mostafa.
(The Scotsman, 21 January 2016)