Dipu and His Goat

Islamic Voice 0 October, 2016 12:00 am
Bouncy, the Runaway Bun!
Words of Wisdom
Moin Cannot Walk, But He Swims like a Champion! 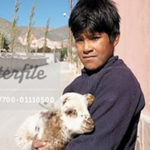 Fisherman Shankar had lost his wife when his son Dipu was born. He lived with his mother and Dipu in a pretty coastal village. Shankar would go out to sea early in the morning to catch fish for a living, leaving Dipu under the care of his grandmother, who Dipu called ‘Dadi’. Dipu did not even know that he had ever had a mother. He thought a grandmother and a father were all that a family should have.
Dipu would leave for school at 8-30 am and be back by 3-30 pm everyday. Dadi prepared his breakfast, packed his lunch box and would see him off at the door as he left for school every morning. She reminded him to come straight back home at the end of the school day. Dadi was always worried that Dipu was lonely and had no one to play with.
One day Shankar brought a baby goat for Dipu. Now Dipu had someone for company. He would pluck green grass and beans for the little kid. He would pat its back, pull its ears, offer it milk in a wooden bowl and take it out for grazing after school hours. Dadi asked Dipu to come up with a name for the little goat. Shankar suggested ‘Kamli’ and they all loved it. It was not long before Kamli became familiar with her name. Whenever Dipu called out to her, she would come bleating to lick his hands and wrest the greens meant for her.
When Dadi sat peeling cucumber, pumpkin, beetroot or watermelon, Kamli would hungrily chomp on the peels. She especially enjoyed the banana skins and sprouted gram. Dadi would prepare a special roti for Kamli every morning which Dipu fed her before leaving for school. Also, he always remembered to fill her pail of water before he left. He would even offer her portions of ice cream and chocolates that Shankar brought for him. Kamli would hop and jump in the open as Dipu and friends played in the large tree-ringed playground. When the sun set at the end of the day, Kamli knew it was time to get back home and would look for Dipu and follow him around. Dipu had arranged a cozy bed of jute sacks in the corner of his room where Kamli would rest for the night.
As days went, Dipu and Kamli soon became inseparable friends. On a Sunday morning, Dipu was to visit his friend Shibu who lived in a house near the beach. He left early in the morning when Kamli was still in bed. As he walked away from home, he saw Kamli following him. He tried to tell her to go back, but she wouldn’t leave him.
When Dipu knocked at the door, Shibu let him in and slammed the door shut. Dipu wanted to bring Kamli in, but Shibu’s mother firmly rejected the idea. “Beta! Pets only look good from a distance. Let Kamli stay outside. She will find things to do on the farm”. Dipu was confused and didn’t know how to react. He did not want to embarrass his friend. Nor was he comfortable leaving Kamli alone outside. He was worried. He peered out of the window and told Kamli to get back home and wait for his return in the evening.
Shibu’s mother had made delicious vegetable burgers and other snacks for the two friends to share. But Dipu was sad. He missed his Kamli very much. He thought, “If she was with me, I could have shared some of these burgers with her”. It took him some effort to hide his tears from Shibu. The two friends played till the evening and as the sun was about to set, Dipu said goodbye to Shibu and his mother and headed home.
Kamli was on her mind. He was lost in his thoughts: “I hope she has reached home safe and happy. Dadi must have given her ganji (gruel) for the lunch. She must be missing me a whole lot”.
Deep in thought, he didn’t even realize that he was walking faster than usual. Suddenly, he heard some noise- the crackling of autumn leaves, snapping of twigs and the ringing of a familiar bell. He turned around to see Kamli emerging from a hedge.
Dipu sprang for her, lifting her with both hands and hugging her. “Kamli! Where have you been all this while? I was expecting to see you at home! Didn’t you return home?”, tears rolled down his eyes.
Kamli was silent. Her eyes were saying: “Shibu! I waited for you all through the day behind the hedge. How could I return home without you?”
(Translated from Shama Sharma’s Hindi story. Some names and situations changed.)