Islamic Voice 0 February, 2018 12:00 am
Sabit Mends His Ways
Enhance Your Word Power
Story of Moosa (AS) and The River Nile

Reha was really very sad. It’s not nice to be cheated, is it?

“Give full measure, and cause no loss to others. Weigh with correct scales: do not defraud people of what is rightfully theirs; and do not spread corruption in the land.”
(Quran 26: 181-183) 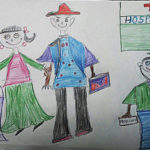 Reha had been saving up her pocket-money for several months. She wanted to welcome in the new year in a new way”by giving things to a charitable hospital that they might find useful. The hospital catered to many poor people.
When the first day of the new year arrived, Reha went to a shop near her home with a list of the things that she wanted to buy for the hospital. Reha explained to the shopkeeper, Mr. Tiz, that these things were a donation for the hospital and asked if he could give her a good discount.
‘I’ll charge you less than half the actual price’, Mr. Tiz said to her’ as he scribbled out a bill”which came to just about all the money that Reha had.
When Reha got home, her father was surprised to see her weighed down with the things she had bought. She excitedly told him what it was about.
‘That’s so sweet of you!’ Reha’s father beamed. ‘Tell me, how much did you pay for all this, dear?’
‘Three  thousand rupees, Papa. Mr. Tiz said he’d charged me half the actual price when I told him that it was a donation for the hospital,’ Reha excitedly answered. ‘That’s so kind of him!’
‘No, no, my dear,’ said  Reha’s father, closely inspecting the things that Reha had laid out on the table. ‘Far from giving you a discount, he’s actually overcharged you! Even without a discount, it shouldn’t have cost you more than half of what you paid!’
‘Really Papa?’ exclaimed Reha, taken aback.
‘Yes, yes, child,’ Reha’s father continued. ‘And then, Mr. Tiz has given you some very poor quality things. Oh, this is really awful!’
Reha was really very sad. It’s not nice to be cheated, is it?
Later that day, Reha and her father went to the hospital and gave them the things that Reha had bought.
The director of the hospital was very touched. ‘Such a wonderful way to bring in the new year!’ he told Reha. Turning to Reha’s father, he said ‘You have such a wonderful daughter! She’s got a lovely heart!’
*
That wasn’t the end of the story. Reha’s father was very sad about what Mr. Tiz, the shopkeeper, had done. When he got back from the hospital, he sent a message through his phone to all the other residents of the locality, telling them what had happened. When they read the message, they were so upset that they stopped going to Mr. Tiz’s shop to buy things.
You can imagine what that did to Mr. Tiz! Soon, with no customers, his losses were far more than the money he had made by cheating Reha. He realised his mistake and was very remorseful. He put up a big board outside his shop, announcing:
“I’m really sorry for what I did. I promise never to cheat anyone again. Thank you Reha for teaching me that dishonesty doesn’t pay.”