Islamic Voice 0 May, 2014 12:00 am
Why are the forests necessary for our environment?
Words of Wisdom
Eight-Year-Old Kashmiri Girl wins Gold in kickboxing

How Much salt is there in the oceans?

If you take all the salt from the oceans and spread over the land, the salt would form a layer more than 500 feet (166 mt) deep.
Why do Birds Migrate? 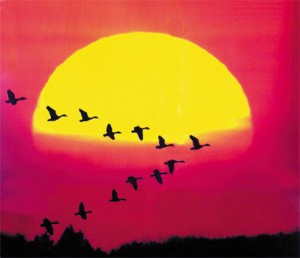 Many species of birds migrate in winter to a warmer climate, but it is puzzling as to exactly how they find their way! Many birds follow coastlines and are able to recognize landmarks, that some birds such as pigeons, gulls and the Man shearwater use the sun or the stars as a compass on trips.
It is no completely know why some migratory birds travel as far as they do to find a higher temperature. The sanderling for instance, a
common shore bird found in England flies sough to South Africa, Patagona or New Zealand. These birds travel mainly along the coasts, though they must also cross vast stretches of open ocean.

When was Television Invented?

John L. Baird of Scotland made the first simple television soon after the first world war. Public TV started in 1936 in Britain.