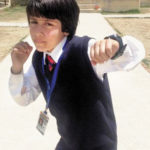 An eight-year-old Kashmiri girl created history by winning the gold medal for India in the world Kick Boxing Championship of under-eight players in Italy’s Andria. “In five days, Tajamul Islam won six games,” said her coach Master Fasil Ali. She defeated her rival from the U.S. to become the world champion in the kick boxing championship. She is first such player to achieve the feat from the volatile Kashmir Valley. A Class 2 student, Islam represented India in Italy where the World Kick Boxing Championship, in which 90 countries participated, was underway. In 2015, Tajamul Islam won the national recognition after bagging the gold medal in sub-junior category National Kickboxing Championship in New Delhi. A resident of Tarkpora village in Bandipora district, 65 km from Srinagar, Islam is a student of the Army Goodwill School. Islam’s brother and two sisters also practice kickboxing. Appreciating the talent, State Education Minister Nayeem Akhtar said, “It’s a proud moment”.
(The Hindu)