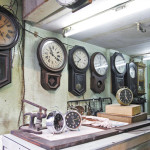 Time: Time is important to all of us. But there is no definition of time. We only refer to it in a manner to show the duration between two events which is only measurement of time. (ÙÙØª)
Horology: The art or science of measuring time. But nowadays the word refers to study of mechanical time-keeping devices.
(ÙÙØª Ù¾ÛÙØ§Ø¦Û Ú©Ø§ Ø¹Ù Ù)
Chronology is the science of arranging the events in their order of occurrence.
(ÙØ§ÙØ¹Ø§Øª Ú©Û ØªØ§Ø±ÛØ®Û ØªØ±ØªÛØ¨)
Hour Glass is a mechanical device used to measure the passage of time. It comprises two glass bulbs connected vertically by narrow neck that allows a regulated trickle of material (historically sand) from the upper bulb to the lower one. (Ø±ÛØª Ú¯Ú¾ÚÛ)
Greenwich Mean Time (GMT): It was the standard solar time at Greenwich which is located at 0o longitude. It is the site where royal observatory is located. For centuries this served as the international standard of time. But today it has been superseded by Coordinated Universal Time UTC. (Ú¯Ø±ÛÙ ÙÙÚ ÙÛÙ Ù¹Ø§Ø¦Ù).
Time Zone: A time zone is a region that observes a uniform standard time for legal, commercial, and social purposes. Time zones tend to follow the boundaries of countries and their subdivisions because it is convenient for areas in close commercial or other communication to keep the same time. India follows a single time zone i.e., the time in Rajkot (Gujarat) will be the same as it is in the easternmost place in Arunachal Pradesh. But the United States has four time zones on the mainland. If the time in New Jersey is 9 am, it will be 8 am in Chicago, 7 am in Salt Lake City and 6 am in Los Angeles. Russia has 12 time zones.
(Ù¹Ø§Ø¦Ù Ø²ÙÙ).
International Dateline (IDL) is an imaginary line on the surface of the Earth that runs from the north to the south pole and demarcates the change of one calendar day to the next. It passes through the middle of the Pacific Ocean, roughly following the 180° longitude. But it is not one straight line. It zigzags to keep small island nations at one side on the line so that they follow a single date. (Ø¹Ø§Ù ÙÛ Ø®Ø·Ù ØªØ§Ø±ÛØ®)
Daylight saving time (DST) or summer time is the practice of advancing clocks during summer months by one hour so that in the evening hours day light is experienced later, while sacrificing normal sunrise times. Typically, users in regions with summer time adjust clocks forward one hour close to the start of spring and adjust them backward in the autumn to standard time.
(Ú¯Ú¾ÚÛØ§Úº Ø¢Ú¯Û Ú©Ø±ÙØ§ ÛØ§ ÙÙØ³ÙÙ Ú¯Ø±ÙØ§ ÙÛÚº ÙÙØª Ú©Ù Ø¢Ú¯Û Ú©Û Ø¬Ø§ÙØ¨ Ø¨Ø¯Ù ÙØ§)
Sun Dial: A sundial shows the time by displaying the position of a shadow on a (usually) flat surface, which has markings that correspond to the hours
(Ø¯Ú¾ÙÙ¾ Ú¯Ú¾ÚÛ)
Clockwise: It is a term used to describe the direction of the circular movement of anything. When something moves right from a point, it is clockwise.
(Ø¯Ø§ÛØ§Úº Ø¬Ø§ÙØ¨ Ø­Ø±Ú©Øª)
Anti Clockwise: When something moves left from a point, it is anti-clockwise. (Ø¨Ø§ÛØ§Úº Ø¬Ø§ÙØ¨ Ø­Ø±Ú©Øª)
Atomic Clock: Atomic clocks are the most accurate time and frequency standards known, and are used as primary standards for international time distribution services, to control the wave frequency of television broadcasts, and in global navigation satellite systems such as GPS.
(Ø§Ù¹Ø§ÙÙÚ© Ú¯Ú¾ÚÛ)
Water Clock: A water clock or ‘clepsydra’ (Greek name) is any timepiece in which time is measured by the regulated flow of liquid into (inflow type) or out from (outflow type) a vessel where the amount is then measured.
(Ø¢Ø¨Û Ú¯Ú¾ÚÛ)
Alarm Clock: An alarm clock is a clock that is designed to make a sound, or some other signal, at a specific time. The primary utility of these clocks is to awaken people from their night’s sleep (Ø§Ù Ø§Ø±Ù ÙØ§Ú)
Stopwatch: A stopwatch is a handheld timepiece designed to measure the amount of time consumed by a particular activity e.g., races, sports events, reply of quiz questions. (Ø§ÙØ³Ù¹Ø§Ù¾ ÙØ§Ú)
AM and PM: The clocks divide the 24-hour day into two equal periods of 12 hours each. These are abbreviated versions of Ante-meridiem (AM) and Post-meridiem (PM). Meridiem is midday. Ante is before. Post is after. So AM is time before midday. PM is time after midday. But it is rather tricky to understand what 12 AM and 12 PM denote. The right way to describe is ’12 Noon’ and ’12 Midnight’.
(Ø§Û Ø§ÛÙ: ÙØµÙ Ø§Ù ÙÛØ§Ø± Ø³Û ÙØ¨Ù  Ú©Ø§ ÙÙØªÛ
Ù¾Û Ø§ÛÙ: ÙØµÙ Ø§Ù ÙÛØ§Ø± Ú©Û Ø¨Ø¹Ø¯ Ú©Ø§ ÙÙØª)
Equinox: This refers to 20th March and 22 September when day and night are of equal duration as sun cross equator. (Ø§ÙÚ©ÙÛÙØ§Ú©Ø³)
Solstice: A solstice is when sun reaches its highest or lowest point. It occurs on June 22 when the day is longest and December 22 when the day is shortest. (Ø³Ø§Ù Ø³ Ù¹ÛØ³).