How are the Laws Made?

Islamic Voice 0 February, 2013 12:00 am
A Different Sort of Birthday!
A Story of Non-Violent Parenting
DID YOU KNOW? – Wonders of God’s Earth

In a democracy, laws are made by the Parliament which is a house of elected members. In India our Parliament has lower house known as Lok Sabha while the upper house is called Rajya Sabha.  A draft bill can be introduced in any of the houses. On being voted by a majority of the members, the bill goes to the other house. If it is passed from there too, it goes to the President of India. If the President gives his assent, it becomes an Act and will be known as the law of the land.  In some cases, the President of India can return the bills even if they have been passed by the two houses of the Parliament for reconsideration. If the houses again return the bill to the President, he is bound to given his assent. 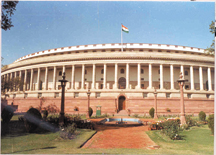