How were the Pyramids Built? 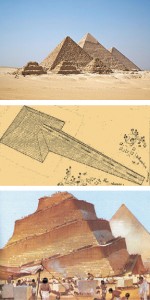 Pyramids are the graves of the Egyptian rulers who were known as Pharaohs or Firaun (as in Arabic). They were made of cubic stone builders which were cut from stone quarries and weighed as much as 2,500 kgs. They were bigger than a big sized room.
But one would wonder as to how they were moved to be placed at such great height as is seen today. Particularly the pyramids of Cheops needed nearly two million such stones. It is said first a ramp would be made till the actual pyramid and the boulders will be moved on a kind of a sledge. It is estimated that nearly 4000 to 8,000 labourers worked on the construction site.