Pela was so saddened by her late father’s behaviour that she decided that she would never borrow anything from anyone if she could help it. 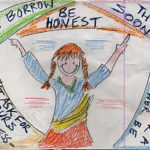 Mr. Tino owned a large factory. He earned enough from his business in one year to feed his family for the rest of their lives. You would have thought that Mr. Tino would have been a satisfied man. But no! He wasn’t! He wanted to open two more factories! Only then, he told himself, could he be really happy.
In order to expand his business, Mr. Tino took a big loan from a friend. “I’ll repay it very soon,” Mr. Tino promised him.
With the money that Mr. Tino borrowed he set up a second factory. In a short while, this factory was bringing in Mr. Tino more profits than his first one.
Mr. Tino could now easily have repaid the loan he had taken from his friend. But he didn’t. Instead, with the profits that he was earning he set up a third factory and was dreaming of a fourth

New Factory
When his friend reminded him about the money he owed him, Mr. Tino lied, “I still haven’t made enough money from my new factory to repay you. Please give me some time.”
Some months later, his friend again raised the matter with Mr. Tino. This time Mr. Tino repeated the same lie and irritatedly added, “Do you think I am going to run away with your money? I’m not a cheat! You’ll get your money back. Don’t pester me!”
Mr. Tino’s friend was very hurt by Mr. Tino’s behaviour. He knew that Mr. Tino was not speaking the truth. He had heard that Mr. Tino’s new factories were doing very well and so Mr. Tino could easily have returned his money. But he kept quiet, hoping that Mr. Tino would soon realise his mistake.
But that didn’t happen. Shortly afterwards, Mr. Tino suddenly had a heart-attack. Before he could be taken to the hospital he was dead!
Bitter Experience
Some days later, when Mr. Tino’s financial affairs were being sorted out by his family, it was discovered that he had not repaid large loans that he had taken from many people.  All of Mr. Tino’s loans had to be repaid by his family, who had to sell off all his factories to do so. They were almost out on the streets now! This bitter experience taught them that cheating never pays.
When Mr. Tino’s daughter Pela learnt about how her father had cheated so many people, she was shocked. She knew her father could easily have repaid his loans because he had more than enough money to do so. He had either intended not to repay his loans at all or only after a very long time, so that by then he could make many times the amount he had borrowed. Either way, it was cheating, Pela knew.
Pela was so saddened by her late father’s behaviour that she decided that she would never borrow anything from anyone if she could help it. She didn’t want to repeat her father’s misdoings. She thought to herself, “God can call me back at any moment, and I don’t want to appear before Him having left unpaid debts here on earth like my father did.”
Pela wasn’t at all like this earlier, but now she became very particular about returning things to people. If she borrowed money from someone, she insisted on returning it as soon as possible. Even if she took something as seemingly small as a pen from a friend she wouldn’t be at ease until she had given it back. Some people thought she was being too particular and harsh on herself, but Pela was clear that she didn’t want to do as her father had.