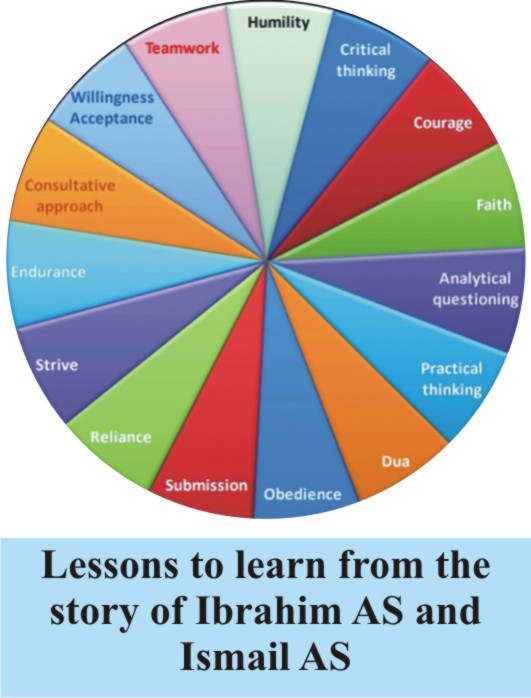 Islamic Voice 0 July, 2022 2:31 pm
Emperor Akbar’s Navratnas
Memories of a Virtuous Mother
It Has to Start From Home!

Ibrahim alaihis salam is known as the Father of Prophets. Ibrahim AS was born some 4000 years ago (yes, that is a very long time ago) in a place that is now called Iraq. The people of his community used to worship idols but it never appealed to Ibrahim AS and he would worship the only one true God – Allah swt.

Almost all of us have heard and read the story of Ibrahim AS. We remember him every year when we celebrate Eid ul adha. Today we will go over his whole story, but focus more on the lessons that we should be taking from his life. We will start with his childhood.

Critical thinking – Despite being completely surrounded by idol worshippers, Ibrahim AS did not fail to use the intellect that Allah swt bestows on every human being. He used his critical thinking ability to remain objective when looking at the so-called objects of worship and then concluded that the star, moon, or sun cannot be anybody’s god. God is the one who created all these things and none other is worthy of worship except Allah.

We get to learn how Allah swt has put us all on fitrah and expects us to use our critical thinking skills instead of blindly believing something.

Courage – From the part when Ibrahim AS breaks all the idols except for the biggest, we get to learn two things. It requires immense courage to go against the whole community in order to make them see the truth. And Ibrahim AS showed the courage to convey the message. The second lesson is how to intelligently speak to a crowd. Ibrahim AS did not lie when asked about the broken idols, instead, he said, ‘Ask your god’.

Faith – The people were furious at what Ibrahim AS did to their idols and wanted to punish him severely. The king ‘ Nimrod’ ordered Ibrahim AS to be burnt alive. At a time like this, when the whole community and your family are against you, it requires very strong faith in Allah. Ibrahim AS had complete faith in Allah’s help and he did not seek anybody’s help. Allah swt ordered the fire, “O fire! Be coolness and safety for Ibrahim.” This is how Allah swt saves His servants who have complete faith in Him.

Reflective questioning – When Ibrahim AS faced the cruel king, he did not lecture him on why he can’t be god. Nor did Ibrahim AS try to explain why Allah swt is the only true Lord. Ibrahim AS posed some reflective questions to Nimrod. Ibrahim AS said, ‘Allah causes the sun to rise from the east. So make it rise from the west.’ At times when one wants the others to see the haqq, one doesn’t need to lecture them for long hours but should practice the skill of asking thought-provoking questions. One analytical question will do the job of long explanations.

Dua – Ibrahim AS showed us the power of dua on multiple occasions. Also when Ibrahim AS was old and yet made dua for a progeny, Allah swt blessed him with Ismael AS despite his old age. This goes on to show two things. The power that duas have and Allah is capable of anything.

Obedience – Allah swt sent a test towards Ibrahim AS and asked him to leave Hajirah AS and Ismael AS in the open desert. Ibrahim AS without a complaint obeyed Allah’s instruction and left both wife and son in the barren desert. Utmost obedience!!

Acceptance – We also get to learn a lot from Hajirah AS. When she was left in the desert with a baby, the only thing she asked her husband was, “Did Allah command you to do so?” when Ibrahim AS replied: “Yes.”, Hajirah AS went into acceptance mode and said, “We are not going to be lost, since Allah, Who has commanded you, is with us.” This was the level of acceptance shown by Hajera AS.

Reliance – Ibrahim AS after all was a human, leaving his wife and son in the open desert did make him miss them, but his reliance on Allah was strong. He completely relied on Allah and implored, ‘Oh Lord, I have left some of my family in a barren valley, in the hope that they will worship you, so fill the hearts of some people with love towards them, and provide them with fruits so that they may give thanks. We all know how Allah swt later brought help to them and made that barren place into a flourishing city. Complete reliance on Allah swt brings great rewards.

Strive – Hajirah AS showed us how to achieve results. Her desperate and determined effort of going up and down the hills of Safa and Marwa to find water didn’t go unnoticed by Allah swt. Allah swt ordered Jibreel AS to start the fountain of Zamzam. Hajra AS’s complete submission plus her endeavour was so highly loved by Allah swt, that He made this act of running from one mountain to another a compulsory part of anybody’s Hajj or Umrah and it will be so till the last hajj on this earth.

Endurance – There are many single mothers in this world. One particular lesson from Hajra AS for mothers is how to successfully raise a child alone without a husband or any family support. Hajra AS did this without complaining. She nurtured Ismael AS in the best of manners. She endured all the hardships alone and raised a dutiful son for her husband. A powerful lesson – submission to Allah’s will and sincere efforts will create beautiful histories.

Consultative Approach – A beautiful lesson for fathers is how Ibrahim AS spoke to his son when he was commanded to sacrifice Ismael AS. “O my dear son! I have seen in a dream that I (must) sacrifice you. So tell me what you think.” Even though Ibrahim AS had submitted completely to the will of Allah and passed his test every time Allah swt sent a test his way, this time Ibrahim AS consulted his son. This showed the respect a father should have for his child’s free will and decision-making ability.

Submission – Ismail AS was raised without the father’s presence, yet he was so respectful towards his father. When his father mentioned to him about the dream, all that Ismael AS had to say was, “0 my father! Do that which you are commanded, Insha’ Allah, you shall find me of the patient.” Such was the degree of submission to his rabb. He did not fear, he did not panic, he did not question. He submitted. And the result of this questionless submission was so loved by Allah swt that He says in the Quran, ‘and We left for him (a goodly remembrance) among generations (to come) in later times.’ And to this day we all follow the tradition of sacrificing a ram to express our essence of submission to Allah swt.

Humility – Despite being the first-ever builders of the most sacred place on earth, Ibrahim AS and Ismail AS remained humble. And made this dua, “Our Lord! Accept (this service) from us: For Thou art the All-Hearing, the All-knowing.” The lesson we need to take is, no matter how big of a deed we do, we still need to humbly ask Allah swt to accept it from us. If He doesn’t accept it, then the mightiest of tasks will go in vain.