Sona sat in her chair silently, observing her parents. “They make no time for me,” she thought. She hardly got to be with them. 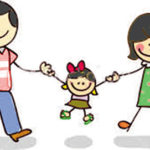 Sona had a lovely time at school that day. Instead of the usual classes, the children watched a film. It was about a family”a father and mother and their son”who spent a whole month up in the Himalayas. They hiked to little villages tucked deep inside narrow valleys. They met hardworking farmers and shepherds, and even a family of yak-herders! They saw a lot of wildlife”colourful birds, hairy mountain goats, and also, far in the distance, something that they thought might have been a snow leopard! Some nights, they camped out in the open, under a star-filled sky, having great fun warming themselves by a bonfire! As you can imagine, the family learnt many new things on that trip.
Returning home in the school-bus later that day, Sona kept thinking about the film. “I wish I could go to such places,” she thought to herself. It had been years since her parents had taken her out of town. They were just too busy doing other things.