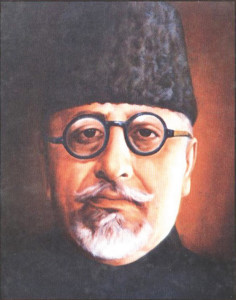 Perhaps all of us have heard the name of Abul Kalam Azad. But very few of us know that he was born in Makkah. The year was 1888. His father was from India but mother was an Arab. His original name was Abul Kalam Mohiuddin Ahmed and was given a nickname ‘Firoze Bakht’. For some years he studied in some madrassa in Makkah and then his family returned to India. It was only several years later that he adopted the pen name Azad (meaning ‘free’) and since he was a great oratory and a scholar, people gave him the title of ‘Maulana’ (meaning ‘learned man’).
Mohiuddin was quite a naughty boy just as any boy of his age would be. He studied Arabic, Urdu and Persian. But his father did not allow him to learn English as he hated the British who were then ruling India. But somehow Mohiuddin learnt the English Alphabets and went on picking up the language through private study until he began to read newspapers and even novels and other books.
He was very fond of books and would read any book that he could manage to lay his hands upon. He would spend the pocket money that his father would give him on buying books. At the age of 12, he had set up a library, a reading room and had organized a debating society at his home in Calcutta (now Kolkata). Around the age of 16, he had brought out a magazine from Calcutta. People would often wait for his magazine to appear on the newsstands.
The magazine was ably edited and used powerful language. The people who had not seen him, often thought he was an elderly person. In 1904, people of Lahore invited him to speak at a huge gathering. Those who went to receive him at the railway station were disappointed to find a 16-year old boy stepping out of the train bogey. There was a mixed feeling of surprise as well as disappointment. He spoke for full two and half hour and the audience remained spellbound. The meeting was being presided by 67-year old Urdu poet Maulana Altaf Hussain Hali. At the end of the meeting, Hali hugged him and said: “My dear son! Though I am convinced that you are the same Azad whom we had read all these years, but my sense of wonderment simply refuses to vanish.”
Azad joined the Indian National Congress in 1910 and plunged into the struggle for freedom of India. He would keep company with books and was very fond of drinking cups after cup of black tea and listening to music when he was alone. Azad had deep commitment to unity among Hindus and Muslims whom he considered a single nation. He began publishing a weekly journal Al-Hilal in 1912. Its circulation grew to 26,000 copies within a few months. The British were afraid of its popularity and imprisoned him for four years.
He met Mahatma Gandhi in 1920 and both became staunch friends and believers in Hindu-Muslim amity. In 1923, Azad was made the President of the Indian National Congress, the youngest ever head of the party. He famously said in his presidential address in the party’s all India session: “If someone promises swarajya (self rule) to India within 24 hours only if the Congress Party gives up the idea of Hindu-Muslim unity, I would opt for unity rather than the swarajya.
Maulana Abul Kalam Azad became the first Education Minister of India after Independence. He conceived and established several famous institutions such as University Grants Commission, Indian National Science Academy, Sangeet Natak Akademi, Sahitya Akademi, Indian Council of Cultural Relations and several other institutions.
Maulana Azad breathed his last on February 22, 1958 at the age of 70. His tomb is situated in the park in front of the majestic Jama Masjid in Delhi. His birthday is celebrated on every 11th November which is designated as ‘Education Day’ by the Government of India.
(Compiled by:
Maqbool Ahmed Siraj)