Mr. Lom began to peel the orange-he just couldn’t wait to taste the first of that year’s harvest. But as he was doing this, do you know what happened? 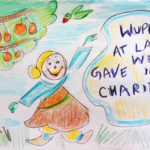 Mrs. And Mr. Lom lived on a large orange plantation. Every year, when their oranges were harvested and sold, Mrs. Lom would tell her husband: “We really should give some of our earnings in charity to the needy.”
And every time Mrs. Lom said that, Mr. Lom would snap at her: “No! No! Why should we? It’s our hard-earned money. Charity only makes people lazy.”
Mrs. Lom was frightened of her husband’s temper. She knew that he was wrong. She was sure that it was good to help people in need. But she didn’t want to be shouted at by her husband. And so, after giving him her advice, she would stay quiet.
This went on, year after year, for many, many years. Each year after the oranges were sold, Mrs. Lom would urge her husband to give some of their income to the needy. And each time he would angrily refuse, making the same excuse. *
That year, Mr. Lom was looking forward to earning a big profit from the oranges. He planned to use a major part of it to buy himself a new car and also to go on a holiday abroad. Little did he know what was in store for him!
Unknown to Mr. Lom, thousands of tiny insects had appeared from somewhere and spread over all the orange trees. And guess what they began doing? They drilled little, invisible holes into the oranges and began merrily munching on them!
One sunny morning Mr. Lom accompanied the farm workers to the farm. He wanted to start harvesting the oranges that day. He was very excited!
Mr. Lom plucked an orange from a tree and rolled it about in his hands. How good it felt, he thought! It smelt so good too!
Mr. Lom began to peel the orange”he just couldn’t wait to taste the first of that year’s harvest. But as he was doing this, do you know what happened? He discovered, to his horror, that the orange was full of little insects crawling about!
Mr. Lom threw away the orange. “Maybe it’s just this orange that’s bad. The rest must be good,” he thought. He plucked another orange, from another tree. But when he peeled it, he was shocked to find that it, too, was swarming with insects!
Mr. Lom was very, very upset! He ordered the farmhands to check all the other orange trees on the farm. And do you know what they discovered? All the trees”every one of them”had been taken over by insects!
You can’t imagine Mr. Lom’s state when he realised that there was going to be no orange harvest that year! That meant that he would have to really cut down on his expenses and even dip into his savings. He certainly wouldn’t be able to buy the new car he was dreaming of or to go on that holiday abroad.
“If you had listened to me and given in charity all these years, maybe this wouldn’t have happened,” Mrs. Lom mustered up enough courage to say to her husband later that day.
Mr. Lom was sunk in his chair, brooding about the oranges and thinking about his wife’s words.
“Well, there’s sense in what you say,” he answered after a while. “I realise now that I ought to have listened to you all these years.”
“It seems you’ve learnt the lesson you needed to,” Mrs. Lom went on. “So, cheer up now! You didn’t give in charity to people all these years, but at least now you’ve been charitable”without intending to”to all those many insects that are thoroughly enjoying themselves, merrily munching away on the oranges!”
You should have seen Mr. and Mrs. Lom burst out laughing at that clever comment! And they continued to laugh till their sides began to ache and they could take it no more!