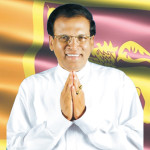 Sri Lankan President Maithripala Sirisena has asked for the support of the minority Muslim community in his government’s efforts for reconciliation with ethnic Tamils following the three-decade civil war with the LTTE. “I trust that those who follow the teachings of Prophet Muhammad in Sri Lanka can make a significant contribution to building a nation rich in tolerance, understanding and reconciliation, which will strengthen the efforts to take the country on the forward march to progress,” he said recently. Sirisena said that the ‘Madina Charter’, written and promulgated by Prophet Muhammad for the pluralistic society, provides answers to most of today’s problems, presenting approaches to solving and preventing conflicts between groups based on differences in culture and belief. Sirisena had received wide support from the 7% Muslim minority in his landslide victory against Mahinda Rajapaksa in the presidential elections in January this year.
“I wish to point out that the Madina Charter shows that Islam rejects the use of compulsion and force in religion and, has been demonstrated over centuries of human existence, that the most effective way to resolve conflicts is through mediation. It guaranteed the safety and welfare of all the communities and promoted reconciliation with all the communities,” he said.
(www.Hindustantimes.com)