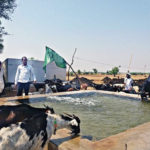 A touching gesture: Abdul Ghafarsab Mulla has installed a pumpset to store water in a large trough for local residents and their livestock to quench their thirst, in Yadgir district. photo: Ravikumar Naraboli

Yadgir: (Karnataka) The scorching summer has dried up almost every natural water source in Yargol village of Yadgir district. In the midst of this dismal scenario, the 3.25-acre agricultural plot of Abdul Gafarsab Mulla is an oasis. The borewell in his plot has not dried up and . Mulla has decided that the precious water is not only for him, but to be shared by other farmers and livestock in the parched village. He has installed a five-horsepower (HP) pumpset to lift and store it in a big trough. Local residents and their livestock are free to walk in and quench their thirst here. They come from a nearly three-km radius to collect drinking water and save their drying crops. “This summer has been the worst for not only humans, but also animals with all natural sources gone,” he says, adding that he is blessed that the water has not dried up in his plot. The borewell has not dried up for several years and yields three inches of water. In his land, he grows jowar and green gram. “Water is the rarest commodity and nobody should hoard it,” he says. Sharanabasava, who draws water from the pump in Mulla’s plot for his adjacent three-acre field, said that his entire crop would have been destroyed by now, but for this act of generosity.
(Source: http://www.thehindu.com)