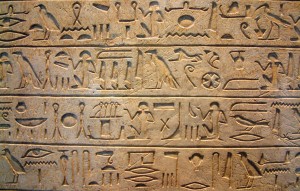 Before the alphabets were developed, Egyptians used a language which comprised symbols and pictures. These were used for some 3,000 years.  Egyptian hieroglyphs (literally, god’s words) were a formal writing system used by the ancient Egyptians that combined logographic and alphabetic elements. Egyptians used cursive hieroglyphs for religious literature on papyrus and wood.
It was in 1799 that French archaeologist Jean-Francois Champollion decoded the hieroglyphs found inside the tombs of some Egyptian Kings whose names were known. However, a great part of hieroglyphics are still a mystery. It is guessed that Sumerians of Mesopotamia had been using hieroglyphs much before the Egyptians.