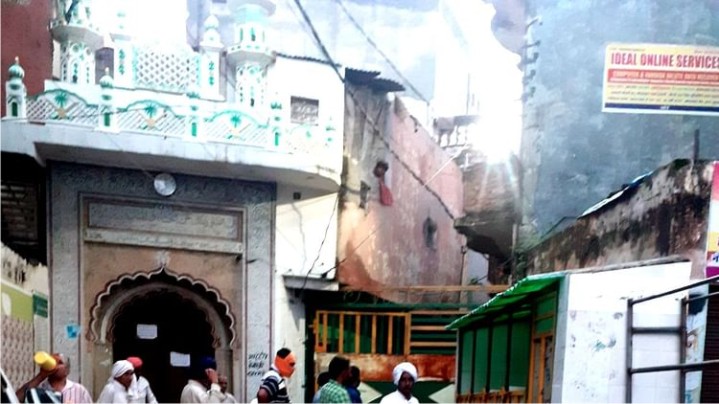 Eight years ago, Muzaffarnagar and Shamli districts in Western UP were hit by the worst communal violence, but now the area presents scenes of communal harmony. The local Muslims opened the doors of mosques. They served food to the farmers who came from parts of the country to participate in the Kisan Mahapanchayat held on September 5 in Muzaffarnagar.

“People in the area have now realized that the 2013 Muzaffarnagar riots were a political conspiracy hatched by the BJP. Everyone is ashamed of this folly and madness; both Jats and Muslims want to mend strained ties and get closer to each other”Ajay Chaudhri, and Irshad Ali stated this, the residents of Muzaffarnagar. They both have actively participated in preparing the Kisan Mahapanchayat, which gave a clarion call to strengthen Hindu- Muslim unity.

Muslims open mosques for farmers
One can see a change in the atmosphere of Muzaffarnagar. Muslims have warmly welcomed farmers who came to participate in the rally from different parts of the country. They opened the doors of mosques for rest and offered food to them. Muhammad Hassan, the caretaker of the Takiyawali Mosque, is being praised for this. The mosque is situated in the city’s most famous square Meenakshi. He opened the mosque’s doors at the dead of night when he saw farmers wandering on the road on September 4.

“I understood that they (farmers) had come to participate in the Mahapanchayat. The city was overcrowded, and they were more worried because of some women in their group. I talked to the mosque committee people, and at 2 o’clock in the night, the mosque was fully opened, and hundreds of farmers came here to rest,” he told Islamic Voice.

More than one lakh farmers from Haryana, Punjab, and Rajasthan came here on September 4 as the organizers did not expect people to come in such a large number.

There were Jat farmers from Jind (Haryana), and some of them even wore saffron-colored headgear. Impressed by the hospitality of the local Muslims, one of them even said that today his attitude towards Muslims has completely changed.

A local resident Amir Azam said that when he arrived to offer Fajar prayers on the morning of September 5, he saw an amazing sight inside the mosque even as Muslims were praying; the farmers stood with folded hands and began to meditate in the adjacent room.

Farmers from Haryana and Punjab would immediately stand up and sit down after making the call to prayer. At the same time, they made sure that their heads were towards the Ka’bah. One farmer unknowingly turned his foot towards the Ka’bah, while the other said to him, “The Ka’bah is in this direction, do not step on it!”

Muslims serve food
In addition to this, local Muslims set up community kitchens on the Bijnor road to Muzaffarnagar, 10 km from Sherpur, Narana, and Bahadurpur. Sakhira, Nagla Mandor, and Kwal villages are also on the same route where the riots erupted after the Nigla Mandoor panchayat held in 2013. A local Jat, Pravendra Singh, said people want to wash away the stains of riots.

Mahapanchayat message
Even though the mahapanchayat- organized by the Samyukt Kisan Morcha,was a massive show of strength and unity of farmers but its most important message was reviving the traditional Hindu-Muslim unity.

In the backdrop of 2013’s worst communal violence, it declared that the farmers would never allow communal riots to happen in the future. The Kisan Andolan will always give a slogan to strengthen Hindu-Muslim unity.

It is interesting to note that the Jat and Muslim-dominated Western UP was pretty much calm and quiet even during the partition time. And for the first time in 2013, it witnessed the worst ever communal riots, which claimed a toll of 68 people, mostly Muslims, and displaced more than 50,000 people in both districts.

Ajay Chaudhary averred that Jats and Muslims have started mending their centuries-old ties, and this unity will not be broken, and of course, it will have an effect on political affairs. He said the late Chaudhri Ajit Singh made great efforts in bringing both the communities together. Hopefully, the golden age of Jat-Muslim unity will return, he said. Echoing this, Waseem Mansoori said when a young man uttered some derogatory words like “mullah” against Muslims before a group of reporters, he was admonished by the Hindu brethren present there.

He then asked the gathering to chant “Allah hu Akbar” and”Har har Mahadev” from the stage set up in Muzaffarnagar’s Government Inter College ground.

It is to mention here that this tradition of slogans was started by Ghulam Muhammad Jola, who was a close associate of the BKU founder. He left the BKU after the demise of Tikait in 2011. Jola kept saying that if Chaudhri Tikait had been alive in 2013, the Muzaffarnagar riots would not have happened. After the riots, the tradition was broken. Now, his son, Rakesh Tikait, has revived this tradition and has brought 36 communities together in the name of Kisan Ittihad to pay true homage to his father.

Rakesh’s younger brother Naresh Tikait admitted that the riots in 2013 had divided the two communities, but now they are reunited again.

It is heartening to note that at least the farmers have shown the courage to take the communal forces head-on trying to push the country towards the path of destruction, said Prof. Mohammad Salim Engineer, vice president of Jamaat-e- Islami Hind.

While commenting on the Kisan mahapanchayat, he said eight years ago, Muzaffarnagar was the scene of some of the most brutal communal violence; the same place was filled with fraternity, love, and mutual trust between Hindus and Muslims. This is the victory of love over hate.