How a Former White Supremacist and a Muslim Refugee Became Friends 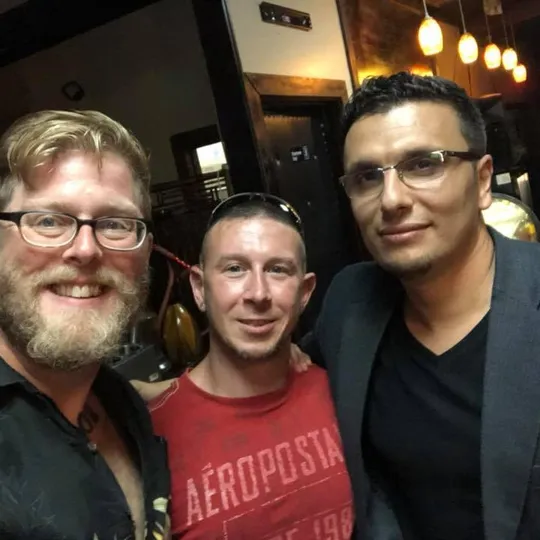 At first glance, Dr. Heval Kelli and Chris Buckley could not be more different. Buckley is a former member of the white supremacist outfit Ku Klux Klan (KKK). Kelli is a Muslim man who came to America as a Syrian refugee and is now a cardiologist and influential civil rights activist. Despite their vastly different pasts, Buckley and Kelli have found an incredible friendship with one another.
“This is my friend, this is my brother. I legitimately love him and trust him,” says Buckley. Two years ago, Buckley and Kelli never would’ve crossed paths, but an intervention changed everything.
From an early age, Buckley said he learned racism and hatred from the adults in his life. He harbored it inside, until it culminated on a tragic day in U.S. history. On September 11th, 2001, a teenage Buckley gathered with his classmates around the television. A plane had just crashed into the Twin Towers in New York City. “I would sit around and think about it, just like the angrier and angrier I would get. I guess I started tapping into those hurtful, resentful emotions that I had trapped inside of me and used it to fuel that anger and that hate. I kind of felt like it was my duty to attack back,” says Buckley. Buckley enlisted in the U.S. Army and was deployed to Afghanistan. “Going through Afghanistan, getting blown up, learning to be angry all the time,” says Buckley. Buckley returned home in 2010, and he broke his back in an accident. “Thus was my introduction to opioid painkillers. Coupled with the anger of being overseas, not understanding what I went through, coming home, you mix that with drugs, and you get real angry. You just want somebody to blame,” says Buckley. “You find yourself in midst of going from what people call you as an American hero to purely destructive force to this country and everything it stands for.” That’s when Buckley joined the KKK.
Buckley’s family was in crisis. Community members began to single out his wife and children because of Buckley’s involvement with the KKK. For several kids in his town, hearing his name was like hearing about a ghost; many feared him. Buckley says: “I had the raging drug addiction, the brainwashed ideology of the supremacist movement, the hate group. And on top of that, I was suffering with the issues that I brought home from overseas with me”
It was clear to his wife Melissa that Buckley wasn’t going to change on his own. She reached out to Arno Michaelis, a man who had been in Buckley’s shoes. Michaelis was once a neo-Nazi skinhead. He had a drastic change in mind and heart in the early 2000’s. Now Michaelis spreads messages of inclusion and forgiveness and helps other people get out of hate groups. He flew from Wisconsin to Lafayette, Ga. to help Buckley leave behind the hateful life he was leading.
Buckley’s change was gradual and met with resistance. Buckley says things once got so heated that he threatened Michaelis with a shotgun. But Michaelis didn’t give up. As time went on, Buckley showed gradual progress, opening up his mind to meeting and accepting new people. He also received treatment for his drug addiction.
Michaelis ran into Kelli at a discussion on Islamophobia. Michaelis mentioned he was about to meet up with Buckley and asked Kelli if he wanted to come along. Though he was on call for his job that day, Kelli agreed to meet him another time. Kelli and Buckley messaged one another on Facebook, growing a sense of familiarity prior to their first in-person meeting.
The day finally came about a year later in the summer of 2018. With slight apprehension, Kelli, whose name Heval means “friend” in Kurdish, drove to Buckley’s home. Buckley’s greeting took him by surprise. “He was like, ‘Hey man, can I take a picture with your Mercedes?'” recalls Kelli with a laugh. From there, a conversation evolved from skepticism to appreciation for one another and their experiences. The two learned they had more in common than they might have thought. They were more alike than different. Most importantly, they shared a love of their family and a love of the United States.
“I always tell people there’s not only a life after hate, there’s life after change, and it takes time,” says Kelli.
Kelli and Buckley developed a close friendship. Kelli even invited Buckley to a Ramadan iftar dinner, hosted at Refuge Coffee Co. in Clarkston, Ga.
Kelli says Buckley is changing for the better and becoming an advocate for accepting people of different ethnicities and religious backgrounds. Buckley is also working on a 12-step program to help other people leave hate groups as well. “If people have a problem with what’s going on in our country, they need to sit around Chris and take notes from him, how this guy changed, and scale it because there is a scalable model here because people are reaching out to him,” says Kelli.
Kelli and Buckley are coming together to normalize their friendship and encourage other people to reach out to those who are different from them. In addition to creating a hate recovery program, they’re starting a conversation on a community level. Their outreach began with an event “When two different worlds unite,” hosted by the Newnan Presbyterian Church. The event focused on unity was in response to a neo-Nazi rally held in 2018. Buckley and Kelli hope to bring people together. They’re sharing their stories to help other people break down their barriers of prejudice and fear.