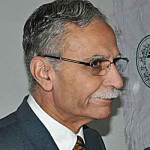 Aligarh: Lt Gen (retd) Zameer Uddin Shah, Vice-Chancellor of Aligarh Muslim University, said Muslims lagged behind in the development race because they kept their women enslaved. “You have not utilised half of your population. Women remained enslaved. They remained inside home. Muslims have no one else to blame. You enslaved women and the result is you are enslaved,” Shah said during a felicitation function of AMU Old Boys at Lucknow last fortnight. “I stayed in Saudi Arabia, the situation remains the same. Women are confined. Except Turkey and Iran, women remained enslaved in all Muslim worlds. That is the reason they are backward,” he added.
Referring to the Muslims, he said: “You left education. There is infighting among the community. There is division on regional lines too. This is also destroying AMU,” he said. Shah also stated that there is no discrimination on religious grounds. “What matters is only qualification and ability. I started as a madrasa student and reached here. The community just rues about discrimination which is non-existent,” he said. Referring to his tenure as V-C, he said: “I may be the most unpopular V-C, but I am not concerned. I did my bit to change the institution. Things like indefinite closure are past now,” he said. Shah claimed that his decision to appoint nearly 400 competent teachers in AMU through proper general selection committee has rattled many senior faculty who earlier hired their relatives. “For appointing 400 teachers, I made 4,000 enemies. Earlier the AMU schools were third-rated. We made the appointments only on the basis of competency. Many disliked it,” he said. Shah also spoke about AMU’s plan to establish schools through Sir Syed Education Foundation in other cities. n
Extracted from:
(http://indianexpress.com/article/cities/lucknow/muslims-lagged-behind-because-they-kept-women-enslaved-amu-v-c/#sthash.nPwhZvHg.dpuf)