Islamic Voice 0 May, 2016 12:00 am
Protest against ISIS atrocities on Minorities in Hyderabad
Christians and Muslims are ‘Brothers and Sisters’
2019 World Interfaith Harmony Week Prize winners 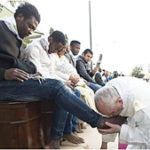 The head of the Catholic Church, Pope Francis, recently visited a refugee centre to wash and kiss the feet of Muslim, Orthodox, Hindu and Catholic refugees. Pope Francis celebrated the traditional Easter Week foot-washing ceremony at a refugee shelter outside Rome, inaugurating the most solemn period of the Catholic Church’s Easter season. The Holy Thursday rite re-enacts the foot-washing ritual Jesus performed on his apostles, and is meant as a gesture of service. Jesus washed the feet of his 12 apostles at the Last Supper.  Eight men and four women took part in the ritual, including an Italian Catholic; three Eritrean Coptic Christians; four Catholics from Nigeria; three Muslims from Mali, Syria and Pakistan; and a Hindu man from India. And one by one, Pope Francis knelt down before these migrants on Holy Thursday and washed their feet. The ritual, performed in a center for asylum seekers outside of Rome, comes amid anti-immigrant sentiment in Europe and in the wake of the terrorist attack in Brussels. “All of us together, Muslims, Hindus, Catholics, Copts, Evangelical [Protestants] brothers and sisters are children of the same God. We want to live in peace, ” Pope Francis said during his homily. A number of the migrants whose feet were washed by the Pope had tears streaming down their faces.