10 Richest Muslim Countries in the World 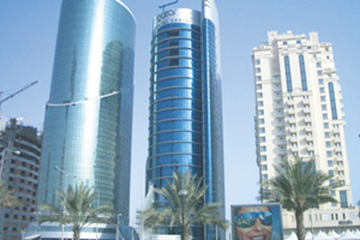 Having a large GDP per capita means a country is an important economic player in the world. Here are the world’s 10 richest Muslim countries according to Yahoo Finance, released recently.
Qatar:

The Gulf state with a population of 1.7 million topped the list of the world’s richest Muslim countries. Qatar had booked a probable gross domestic product per capita of more than 88,919 dollars for 2011. The main drivers for this rapid growth are attributed to ongoing increases in production and exports of natural gas, oil and petrochemicals. Qatar, which will host the 2022 Football World Cup, is also in the running for the 2020 Olympics Games.
Kuwait:

The country with a population of about 3.5 million is the second richest Muslim country in the world. The gross domestic product per capita is 54,654 dollars for 2011. Kuwait has proven crude oil reserves of 104 million barrels, estimated to be 10 percent of the world’s reserves. Kuwait’s oil production is expected to increase to 4 million barrel units by 2020. Other major industries include shipping, construction and financial services.
Brunei:
Brunei is the third richest Muslim country in the world. It has GDP per capita of about 50,506 dollars for 2010. The country is rich due its extensive petroleum and natural gas fields.
The country’s economy has been dominated by the oil and gas industry for the past 80 years, and the hydrogen resources account for over 90 percent of its exports and more than half of its GDP.
United Arab Emirates:

The United Arab Emirates takes the 4th position in the list. UAE banks on its oil and gas for about 25 percent of the GDP which is nearly 48,222 dollars for 2011. In the country, petroleum and natural gas exports plays an important role in the economy, especially in Abu Dhabi.
Oman:

Oman is the fifth richest Muslim country in the world. It has a GDP per capita of 28,880 dollars for 2011. Oman’s proved reserves of petroleum totals to about 5.5 billion barrels.
Saudi Arabia:

The country takes the 6th position in the list. It has a GDP per capita of 24,434 dollars for 2011. Saudi Arabia has the world’s second largest oil reserves and oil accounts for more than 95 percent of exports and 70 percent of government revenues. It also has the world’s sixth largest natural gas reserves.
Bahrain:

Bahrain is the seventh richest Muslim country in the world. It has a GDP per capita of 23,690 dollars for 2011. Petroleum is Bahrain’s most exported product.
Turkey:

Turkey takes the 8th position in the list. It has a GDP per capita of 16,885 dollars for 2011. Tourism in Turkey has experienced a rapid growth and constitutes an important part of the economy. Other key sectors of the Turkish economy are banking, construction, oil refining, petro chemicals and automotive. Turkey is one of the leading ship-building nations and is ranked 4th in the world after China, Japan and South Korea, in terms of number of ordered ships.
Libya:

Malaysia takes the 10th position in the list. The country has a GDP per capita of 15,589 dollars for 2011. Malaysia is an exporter of agricultural resources, the most valuable exported resource being petroleum. The country has also been the largest producer of tin, rubber and palm oil in the world. Tourism in Malaysia is the third largest source of income from exchange.