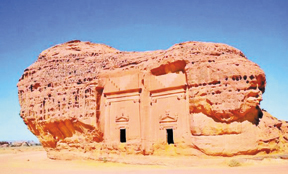 Jeddah: Fifteen missions from abroad, including teams from France, Italy, the United States, Britain, Germany, Japan and Belgium, are cooperating with the General Authority for Tourism and Antiquities, Saudi Arabia, to explore 15 projects at historic and archaeological sites in different regions of Saudi Arabia. The archaeological survey began in the Kingdom 40 years ago with the implementation of five-year plans carried out by Saudi missions in cooperation with foreign missions. Through the missions, many archaeological sites were demarcated and recorded and some sites were chosen for further exploration. Archaeological discoveries include artifacts from ancient cities, such as housing units, architectural buildings, castles, forts and towers. Other discoveries include ponds and dams, canals and wells, pottery, tools made of steatite, glass items of different colors and shapes, metal coins and ornaments, weapons made of minerals, and many rock drawings and inscriptions in Nabataean and Southern Mosnad, as well as other scripts.
Daifallah Ettalhi, head of Tourism and Archaeology at the University of Hail and the President of the Saudi side in the Saudi-French Mission at the site of Madain Saleh, said: “The Arabian Peninsula is the cradle of ancient civilizations, but many aspects of its great history are still unexplored. The Authority’s work in this field is to direct archaeological detection towards a deeper understanding of the history of Arab and Muslim nations, as well as human history in general.” According to Ettalhi, the mission has found many artifacts in Madain Saleh, notably currencies dating back to the reign of Al-Harith, the fourth King of the Nabateans who ruled during the period 9 BC to 40 AD.