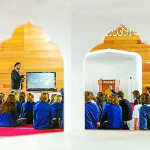 Langwarrin: (Australia): Students from Padua College, Mornington, Australia, had a glimpse into the world of Islam during a visit to a mosque in Langwarrin, Mornington Peninsula News reported. For the second year in a row, the college students had visited the Bait-ul-Salam Mosque where they were delivered a talk about the basic teachings of Islam by Iman Syed Wadood Janud. “The purpose of this visit is to educate young Australians about Islam, and repelling any misconception and negative perceptions they have,” Mosque spokesperson Soofi Aziz said. Visiting the mosque in a number of batches over two days, 300 students were told by Iman Janud that Islam is “a religion that teaches peace, tolerance and harmony”. “Anyone who commits a barbaric act or any form of terrorism in the name of Islam has nothing to do with its true teachings,” Iman Janud told the students.