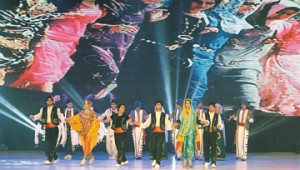 Baghdad was inaugurated as the 2013 Arab Capital of Culture, the latest in a series of steps which may put Iraq back on the map after decades of conflict. The ceremony marking the event was held under a massive tent in the Iraqi capital’s Zawraa Park, and featured a choir, singing songs and a performance by renowned Iraqi musician Naseer Shamma, as well as speeches by senior Iraqi politicians and Arab League chief Nabil Al-Arabi. The events surrounding the Arab Capital of Culture will include music performances, photography exhibitions, as well as folk arts and crafts shows. “Baghdad, which was a source of knowledge for the entire world, is rising again today thanks to the efforts of Iraqis and their Arab brothers,” Prime Minister Nuri al-Maliki said in a speech.
It is the latest in a series of efforts by Iraq to raise its global profile after three decades of war and sanctions which led to its international isolation, economically as well as culturally. The city hosted the Arab League summit in 2012, and later that year was the site of talks between global powers and Iran on the Islamic Republic’s controversial nuclear program. It is also scheduled to host football’s Gulf Cup in 2015.