RukaNade founder Nermana Huskic came to St. Louis (USA) in the late 1990s, arriving with family members as refugees after the Bosnian war.

For NermanaHuskic, the seeds of her future as a resource and service provider for homeless people were planted young. At the age of 5, HuskiÄ witnessed terror and violent intimidation by Serbian soldiers who barged into her home looking for her father and other male figures. It was 1992 and the start of the Bosnian war. The Bosnian Serbs set out to rid the country of its Muslim population and gain desired land. The war destroyed many families and killed more than 100,000 people. Luckily, HuskiÄ’s family found a way out of their hometown of Zvornik to a nearby village. Though the village was supposed to be a safe zone for Bosnians, HuskiÄ says the Serbian soldiers would shoot at the Muslims from above the village. “There were times when we didn’t have anything,” HuskiÄ said.
And after the war was over, Huskic, her mother and brother were approved to move to the USA. She remembers being excited to move to a diverse city like St. Louis, but the harsh realities of refugee life quickly settled in. With her father back home in Bosnia, her mother had to pick up three jobs to take care of her and her brother. HuskiÄ, now 32, credits the city of St. Louis for extending its resources to her family in the late 1990s, and she is returning the favor. In 2017, she founded RukaNade, a nonprofit that works with the city’s homeless population, seniors, youth, and families and also with orphans in Bosnia. 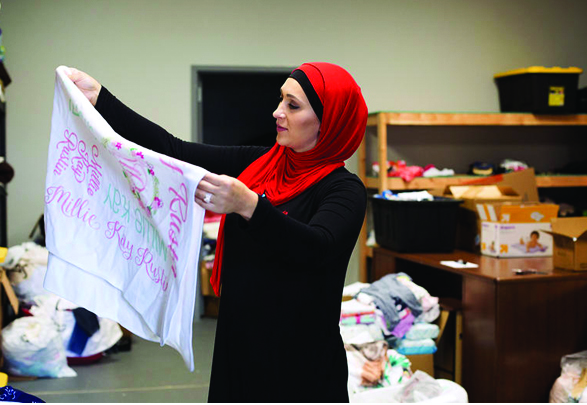