Brigadier General Nagwa El-Haggar is one of the three female Muslim police officers who died in the attacks. 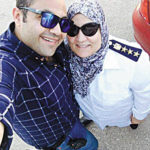 A Muslim police officer who died in the line of duty during a terrorist attack on Coptic Christians in Egypt is being hailed as a hero.  At least 44 people died, and more than 100 were injured, during bombings that targeted a Coptic cathedral and another Coptic church on an important holy day for the Christian calendar, Palm Sunday. The Daesh terrorist group claimed responsibility for the attacks.  Brigadier General Nagwa El-Haggar was one of at least seven Egyptian officers killed on that day, three of whom were Muslim women. She was reportedly posted at the entrance to St. Mark’s Coptic Orthodox Cathedral in Alexandria, where the Coptic Pope Tawadros was leading a Palm Sunday mass. The suicide bomber attempted to enter the cathedral through a main gate, but was stopped by security officers. The attacker then detonated the bomb outside the cathedral. El-Haggar was conducting inspections on people entering the cathedral grounds when she saw her male colleagues struggling with the suspect. She was killed while rushing to help her colleagues.
(Extracted from www.huffingtonpost.com)