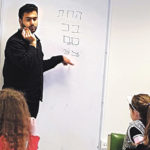 Zain Hussain, an inspiring 22 year-old Muslim educator, is teaching Hebrew to Jewish youngsters at a synagogue in the UK. He is among the very few Hebrew teachers in the UK. He is studying for a masters in international politics at the School of Oriental and African Studies, having earlier completed an undergraduate degree in Arabic and Hebrew, during which he spent half a year in Jerusalem and half a year in Jordan. Softly spoken, well-educated and interested in other cultures and religions aside from his own Muslim faith, Zain has now found himself teaching Hebrew to Jewish youngsters in the Wimbledon and District Synagogue on Sunday mornings. How did that come about?  “I needed money,” he says, giggling. “A year abroad drains your bank balance! I knew the head teacher there so asked about part-time jobs. I went for the interview and got it.”