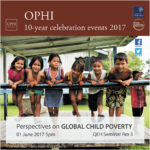 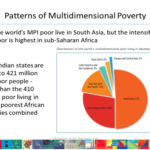 Two of the every five children in the world are multi-dimensionally poor.
Children represent the hope of any community or nation. Well-nurtured children would grow into confident adults who will contribute to the nation’s development in full measure.
Several measures have been initiated to ensure that children’s development does not suffer due to economic deprivation. The international community too has affirmed eradication of child poverty as one of the goals under Sustainable Development Goals (SDGs). The definition of a child is anyone under 18 years of age.
The Oxford Poverty and Human Development Initiative (OPHI) has recently released a report on “Children’s Multidimensional Poverty” or MPI in short.

What is MPI?
The global MPI is an index of acute multidimensional poverty that measures the nature and magnitude of overlapping deprivations in health, education and living standard at the household level.
The MPI includes indicators of children’s achievements such as school attendance and nutrition. In matters of health, it takes into account nutrition and child mortality. In education, it looks at both years of schooling and school attendance. In matters of living standards, it looks at cooking fuel, improved sanitation, safe drinking water, flooring, and electricity and asset ownership to gauge the standard of living. Some facts revealed by the Report are:
Half of all multidimensionally poor people “ 48% “ are children.
Nearly two out of every five children “ 37% “ are multidimensionally poor. This means 689 million children are living in multidimensional poverty.
87% of these 689 million poor children are growing up in South Asia (44%) and in Sub-Saharan Africa (43%).
Half of South Asia’s children and two-thirds of Sub-Saharan children are multidimensionally poor.
Global MPI estimates are higher for children than for adults for all 103 countries. Children are also deprived in more indicators at the same time; they are deprived in 52% of the MPI’s weighted indicators on average.
In 36 countries, including India, at least half of all children are MPI poor. In Ethiopia, Niger and South Sudan over 90% of children are MPI poor.
Over two-thirds of children live in middle income countries.
Half of the MPI poor children live in ‘alert’ level fragile states, and child poverty levels are the highest in the worst of the fragile states.

How is Multidimensionally Poor Child is Identified?
Think of Sameer being a 9-year old child living in Siddipet village of Medak district in Telengana. His village is accessible only by a dirt track. He is one among the five children of Subbu and Mythii. A child born to his mother earlier than Sameer did not survive. They have a patch of land which yields just enough for them to make two meals a day, but not enough to sell and get some extra income.
Subbu and Mythili do not have much to work on their own land. So they go out to work on others’ land which is just about a week in an average month. This fetches them just about Rs. 1,000 a month which is what they can spend on children’s schooling, other food items and essentials.
They do not have a well in their land. They draw water from the village well. In summers, they have to walk to another village to fetch water as the local well dries up.
Subbu’s house has mud walls and thatched roof and dirt flooring. The village has no electricity. They burn kerosene lamp for essential work during evenings. The children can read only in the morning. Most cooking happens under the open sky where twigs gathered from the nearby wilderness are used as the fuel.
Subbu and the family do not have a TV, radio, fridge, oven or even a bicycle. So their connectivity with outside world is very limited and mobility is confined to the village and its environs, the distance they can cover on feet. They do have a few goats and some hens which provide them some income by way of selling the kids and eggs. Sameer is a multidimensionally poor child.
(For full version of the report log on to: http://www.ophi.org.uk/wp-content/uploads/Brief_46_Child_MPI_2017-1.pdf)