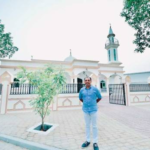 Fujairah (UAR): A Christian expat, who landed in the UAE with just a few hundreds of dirhams in 2003, is gifting a mosque to hundreds of workers this Ramadan. Indian national Saji Cheriyan, 49, has built the mosque for Muslim workers living in a worker accommodation that he rented out to 53 companies in Fujairah. The mosque, built at a cost of Dh1.3 million in the East Ville Real Estate complex in Al Hayl Industrial Area, can accommodate 250 worshippers at a time. Hailing from Kayamkulam in Kerala, Saji who has gone through ups and downs in the past 15 years, said he decided to build the mosque after he saw workers taking taxis to go to the nearest mosque. “They have to spend at least Dh20 to go to Fujairah city or another industrial area to attend the Juma prayer in a mosque. So, I thought it will make them happy if I build a mosque here next to their accommodation.” “The Awqaf officials were surprised and happy when they got to know I am a Christian who wishes to build a mosque. They offered me all the support and were ready to offer free electricity and water and other facilities,” said Saji. However, all that he has accepted from Awqaf are the carpet and sound system for the mosque. He said he has opted for the name Mariam, Umm Eisa (Mary, the Mother of Jesus) for the mosque, after an Abu Dhabi mosque was renamed so in 2017. Saji, an Orthodox Christian by birth, had previously built a church for his parish in Dibba.