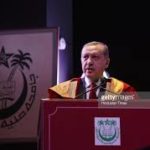 “Terrorism cannot be stopped by power alone. It can only be stopped by fighting poverty, inequality and ignorance,” said Turkish President Recep Tayyip Erdogan, at the Jamia Millia Islamia, where he was conferred an honorary doctorate on the second day of his second visit to India. He had earlier come to India as Prime Minister in 2008. Heading a nation that is beleaguered with terror attacks, Erdogan said he has been fighting the self-styled ‘Islamic State,’ and that the group has brought a bad name to the religion of Islam. “We are fighting Daesh (Islamic State) with commitment. It is an infamy to Islam, it is a blasphemy to Islam. Our battle with it will continue,” he said. A degree of Doctorate of Letters (D.Litt.) was conferred upon Erdogan by Jamia Chancellor M.A. Zaidi.