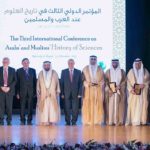 The College of Arts and Sciences of the University of Sharjah, United Arab Emirates organized a three-day event, “Third International Conference on Arabs’ and Muslims’ History of Sciences”, recently, under the theme, “The Arabic and Islamic Scientific Heritage: Innovation, Acculturation, and Coexistence.” The conference was held under the patronage of Shaykh Dr. Sultan Bin Mohamed Alqassmi, Member of the Supreme Council of the United Arab Emirates, Ruler of Sharjah and President of the University of Sharjah. Dr. Sultan has completed a PhD with distinction in History at Exeter University in 1985, and another in the Political Geography of the Gulf at Durham University in 1999. The conference offered valuable opportunities for knowledge exchange, networking and learning about the Arabs and Muslims scientific and scholar heritage and latest findings and discoveries in the field. The conference had the following themes: Innovative Culture and its impact in building educational community if the Islamic Civilization. Scientific Research in Islamic Civilization. Reviving the Arabic and Islamic Heritage and connecting it with modern scholarly activities. History of Medicine and Health Sciences in Arabic and Islamic Civilizations.
The three-day event examined and discussed more than 150 scientific papers, delivered by experts from over 20 countries. The University of Sharjah was established as a non-profit institution for higher education in October 1997. n