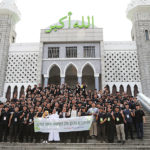 Catholic deacons in front of the Seoul Central Mosque in Itaewon district, Seoul, South Korea. (Photo by The Catholic Times of Korea)

Over 100 Catholic deacons in South Korea made a pilgrimage to places of worship of other religions in Seoul from June 20-22 to promote religious tolerance and understanding. The 108 transitional deacons joined a three-day event dubbed the Ecumenical and Interreligious Pilgrimage of Catholic Deacons organized by the Catholic Bishops’ Conference of Korea (CBCK). During the visit to Korea’s largest mosque on June 22, Song Bo-ra, an official with the Korea Muslim Federation, said Islam is often misunderstood as a religion of violence. “The Quran says, ‘Whoever kills a person [unjustly] “ it is as though he has killed all mankind’,” he said. “Islam is a religion of peace not violence. That’s why we always greet people with the salutation, ‘As-salamu Ê¿alaykum,’ which means ‘peace be upon you’.”