Islamic Voice 0 December, 2014 12:00 am
We need to travel beyond Hilal and Halal
UN Chief Urges Myanmar to Halt Attacks on Rohingyas
Huquq-ul Ibad: Caring for Others 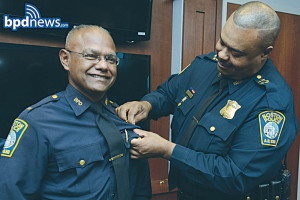 The Boston Police Department has promoted its first Muslim to Captain. In his new role, Haseeb Hosein wants his officers serving as ambassadors for the Department by going to schools and reading to children. As Boston police Captain Haseeb Hosein, a former science teacher and a firm believer in the power of reading, assumes leadership in Mattapan as the department’s first Muslim captain, he plans to have his officers walking not only the streets, but school hallways.
Hosein’s promotion makes him the highest-ranking Muslim in the department and one of three minority captains. “The promotion to captain of Haseeb Hosein goes directly to my commitment of making the police department more reflective of the community we serve,” Police Commissioner William Evans said in a statement. “It is both historic and an honor for me to promote the first black Muslim captain to my command staff.” As the department’s first Muslim captain, he said, he feels he can inspire young Muslims to join the force and serve as an ambassador for a faith that is often viewed negatively. “I can be a voice to denounce violence, and let people know that the 1.6 billion Muslims in the world are just like them,” Hosein said. “I hope to be that voice that speaks out loud.”