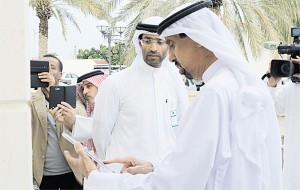 Dubai: The United Arab Emirates opened its first smart mosque in Dubai last fortnight. The Department of Islamic Affairs and Charitable Activities (DIACA) launched the Sheikh Mohammed bin Rashid Al Maktoum Mosque in Jumeirah 3, using the Quick response (QR) code technology which offers digital access to mosques. The mosque is now equipped with the QR code technology for the first time in government buildings and is part of Phase-I of developing smart mosques that also includes nine other mosques which will follow suit later this year, according to a report in Khaleej Times. Through the QR code technology, people can get general information about a mosque “ its history, capacity, nature, area, prayer timings, lectures or courses offered by the mosque, as well as information about Friday sermon, round the clock. The move is in line with the Smart Government initiative announced by Sheikh Mohammed bin Rashid Al Maktoum, Vice-President and Prime Minister of the UAE and Ruler of Dubai. Dr Hamad Al Shaibani, Director-General of DIACA, said the interactive services available are accessible through smart phones and tablets 24X7. Nassir Mubarak, head of IT section at DIACA, said the smart mosques project is a new channel that aims at better communication with the public. The public may also send their suggestions, remarks, feedback, complaints, or reports on any dysfunction through the smart mosque initiative. QR code is the trademark name for the two dimensional barcode system which was originally invented in 1994 by Denso Wave, a Toyota subsidiary, as a way to track vehicles assembled in a place, and to scan components at high speeds. QR codes have long since expanded their usefulness beyond the automotive industry. The QR code technology allows people to access a special webpage of the mosque by scanning its barcode with a smart phone or tablet which are automatically equipped with this technology, otherwise an app for QR code can be downloaded easily for concerned online stores.