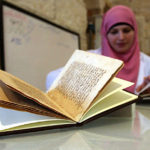 The Saxon Academy of Sciences in Leipzig, Germany has launched a digital platform to document millions of books and manuscripts from the Arab and wider Muslim world. The platform named “The Arab Library” was launched recently, providing researchers and academics access to rare and original historical texts. The project is scheduled to run until 2036, with the possibility of its work being extended if demand exists. A budget of ¬7.5 million ($9 million), funded by the German federal government and local authorities in various states, was allocated to the initiative, which is being supervised by Dr Freena Kalim, a professor of Arabic and Islamic Studies at Leipzig University. “This project is a huge tool to help scientists and researchers in the field of Arabic studies and Islamic sciences,” Kalim said in a statement. “Arab literature has been inherited for about 1,400 years, and the culture of books in the Arab-Islamic civilization is rich, vibrant, diverse and unlike any other.” The collection features literature, religious texts, encyclopedias, dictionaries, news briefings and books on poetry, travel and nature. Most of the library derives from the period between the 12th and 19th centuries, one that was classified as a phase of decline of the Arab-Islamic culture after its ‘golden age’ in Andalusia.