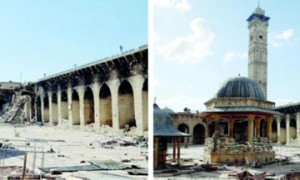 Aleppo: The minaret of the landmark 12th century mosque in the northern Syrian city of Aleppo was destroyed last fortnight, leaving the once-soaring stone tower, a pile of rubble and twisted metal scattered in the tiled courtyard. President Bashar Assad’s regime is being blamed for the destruction to the Umayyad Mosque, which occurred in the heart of Aleppo’s walled Old City, a UNESCO World Heritage site. It was the second time in just over a week that a historic mosque in Syria has been seriously damaged. Standing inside the mosque’s courtyard, a man says, regime forces fired seven shells at the minaret but failed to knock it down. According to The Associated Press, the tank rounds struck their target after few days. “We were standing here and suddenly shells started hitting the minaret,” the man says. “They (the army) then tried to storm the mosque, but we pushed them back.” Five of Syria’s six World Heritage sites have been damaged in the fighting, according to UNESCO, the UN’s cultural agency.