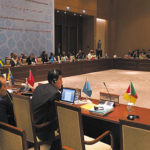 Jeddah: The Organization of Islamic Cooperation (OIC) plans to launch an International Media Award to reward the distinguished media outlets and media professionals in the area of promoting intercultural dialogue and tolerance.
The OIC Council of Foreign Ministers (CFM) adopted, during its last meeting held in the Uzbek capital of Tashkent, a resolution recommending the creation of a Media Award, proposed by Senegal, to support the Muslim and international press that promote harmony among communities The CFM called on the OIC member states and financial institutions to provide full support for the Media Award. The OIC Ten-Year Program of Action has put dialogue among the civilizations, cultures and religions on top of its priority, for the development of the culture of peace and moderation among nations and civilizations.