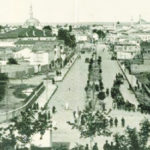 Istanbul: The Research Centre on Islamic History Art and Culture will hold a 3-day International symposium at Konya in Turkey on the topic of Konya in Islamic Civilisation on November 11 to 13. It is being co-hosted by KTO Karatay University and sponsored by the OIC which has designated 2016 as the Islamic Tourism Capital for 2016.
Konya was the capital of Seljuk Turks and was active centre of education, scientific research and art and culture during 800 to 13th century. Sufi Mevlana Jalaluddin Rumi has been identified with the city in the 13th century. Later it became an important centre for administrative training during the Ottoman Government. It still holds a prominent place in Turkish trade, commerce, industry and culture. Its tombs, madrassas and mosques hold great tourist potential.
The city’s history, culture and art with economic and social structure from its conquest to present day will be discussed during the symposium. The organizers have called for papers. The abstracts will be accepted by August 30, 2016. Acceptance of abstracts would be announced by September 15. IRCICA General Director Prof. Halit Eren and Prof. Selcuk Ozturk of KTO Karatay University are co-presidents of the symposium.