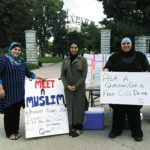 London: Members of London’s Muslim community joined together outside Victoria Park recently for the first “Meet a Muslim event”. “I decided to hold this event to help educate the community, reaching out to the community by spreading awareness to stop Islamophobia,” said organizer Tamara Elsayed, aged 28. Sparked by the recent incidents of Islamophobia in London and Donald Trump’s comments about banning Muslims from entering the United States, Elsayed encouraged Londoners to ask any questions they had about Islam. More than 100 people came by, said Elsayed, with more than 50 taking the time to chat with the Muslim women, who offered brownies, cookies and free bottled water. “We saw this and decided to stop by, had some treats, learned a little bit. It was good, win-win,” said Marlon Brown, who stopped by after brunch downtown with his friends. “Groups and groups of people were coming to speak with us to thank us,” said Elsayed, “I even had a police officer pull up and come to thank us because he thought it was fantastic.”