Mosque in Memory of Girls

Islamic Voice 0 January, 2015 12:00 am
Romania
Pope Francis Calls for a Global Educational Pact
Christians in Muslim-Majority Malaysia Can Use The Word ‘Allah’ In Publications 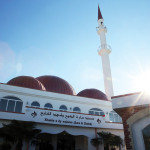 Shkodër: A new mosque, called “The Mosque of Two Girls; Sara and Shehd” was inaugurated on December 12, 2014 in the city of Shkodër, in northwestern Albania. The ceremony was graced by Imam Muhamed Sytari, Mufti of Shkodër, Maxhid Cungu, president of the Regional Council Shkodër, Ilir Hoxholli, chairman of the State Committee on Cults, Ramiz Zekaj, president of Albanian Institute of Islamic Thought and Civilization (AIITC) and Ahmed Al-Shaye, representative of the Kuwaiti donor’s family. After the inauguration, the participants performed the first Friday prayers in the new mosque. It is noteworthy that the mosque bears the names of ‘Sarah and Shehd,’ who died about two years ago in a painful accident, and their father, Ahmed Al-Shaye, decided to build this mosque as an act of charity in their memory.