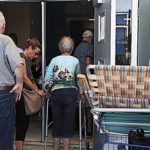 The Georgia chapter of the Council on American-Islamic Relations (CAIR-Georgia) announced that a dozen mosques across the State of Georgia plan to serve as temporary shelters for Georgia and Florida residents fleeing Hurricane Irma.
Mosques as far north as Marietta, as far east as Savannah, and as far south as Macon are encouraging travelers, evacuees and others displaced by the Category 5 storm to check the listing of participating mosques, and seek refuge in the one closest to them.
“When Hurricane Harvey struck Texas, dozens of Houston mosques served as shelters for residents left stranded or homeless by the disaster. Georgia mosques stand ready to provide the same service to our neighbors of all faiths and backgrounds,” said Hamid Qureshi, executive director of the Atlanta chapter of the Islamic Circle of North America (ICNA), one of the nation’s largest Muslim charities. “Because most Georgia mosques contain carpeted prayer halls, our houses of worship can easily shelter large numbers of people,” said Dr. Khalid Siddiq, a member of Al-Farooq Masjid, the largest mosque in Georgia.